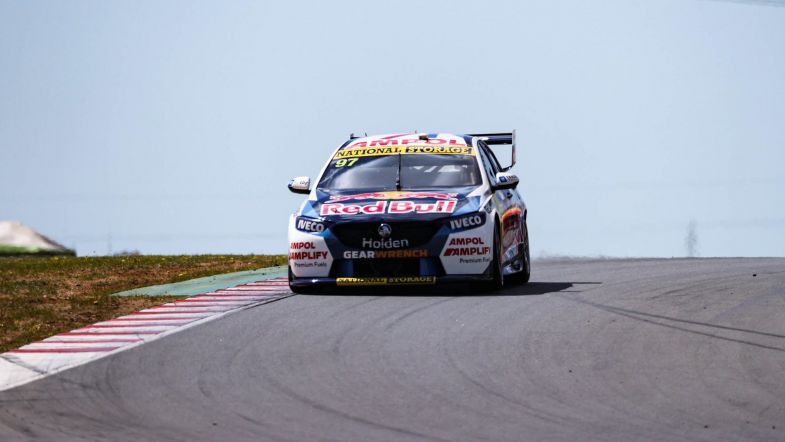 Triple Eight’s Shane van Gisbergen has taken his third win of the Supercars Championship season in a controlling drive from the front, making use of better tyre life and pace to lead his New Zealand compatriots to the top step of the podium.

The 2016 series champion made a strong start and led from the front, dictating the race’s pace and putting himself in the box seat with a late tyre stop to have a speed advantage in the latter stages of the 24 lap outing.

An even jump off the front row of the grid between van Gisbergen and Scott McLaughlin saw the Triple Eight car sweep around the outside of the DJR Team Penske #17, resulting in van Gisbergen taking control of the race on the opening lap.

Changing his strategy from Saturday where he checked out but burnt up the tyres on the #97 car, van Gisbergen almost looked to be a cork in the bottle with McLaughlin, Fabian Coulthard and Walkinshaw Andretti United’s Chaz Mostert staying in touch throughout the opening laps.

Mostert was the first of the front bunch to come in for tyres on lap four, being followed by McLaughlin on the next lap but able to make use of the undercut to take the position away from the Kiwi as they both made use of the fresh air in front.

Coulthard became the next driver to pit and was passed when he rejoined by the Kelly Racing #7 of Andre Heimgartner who had stopped the lap before, engaging in a scrap with his fellow New Zealander which resulted in the latter retaining the spot ahead.

Further back in the pack, championship contender Jamie Whincup’s day went from average to poor when an air spike failure meant his car couldn’t be raised up at the start of his pit stop, robbing him of time which dropped the #88 Triple Eight driver back to 19th in the order.

His team-mate van Gisbergen finally pitted from the race lead on lap 13, taking just rear tyres and ending up less than a car length behind McLaughlin when he rejoined the circuit though he squeezed past his adversary at Turn 6, setting his sights on Mostert in the race lead.

It only took a lap for van Gisbergen to get back in front, squeezing past the WAU car between Turn 1 and 2 which opening up an opportunity for McLaughlin to make a run for second though in his scrap with Mostert, they both lost momentum and lose spots to Heimgartner who made a three-wide pass down the inside at Turn 6 for second place.

Mostert’s woes continued as he started to struggle on the older Dunlop rubber, dropping like a stone down the top order from second to ninth in only a handful of laps, a big fall from grace for the man who had set the fastest lap of the race on lap eight.

Out front, the pressure was off van Gisbergen as he converted to take his third win of the season while Heimgartner notched up his second second-placing of 2020, McLaughlin settling for third but still 15 spots ahead of title rival Whincup in 18th.

Coulthard was able to get by Tickford Racing’s Cam Waters on the penultimate lap, the #6 car struggling on worn out rubber while Coulthard was driving as a reinvigorated man after taking his first win of the year in yesterday’s opening race.

The Kiwi sweep of the top four was a first in Supercars history while Anton de Pasquale just took fifth from Rick Kelly in the final corners, the Erebus driver notching up another top five finish with team-mate David Reynolds in seventh after displacing the ailing Waters.

South Australian local Nick Percat was home in ninth, the best of the Brad Jones Racing boys, just getting up over Tickford Racing driver Jack Le Brocq who himself had only just managed to beat Mostert in a drag race to the line.

The final race of the weekend starts at 1425 local time and again runs for 24 laps to round out the first of the back-to-back rounds at The Bend.