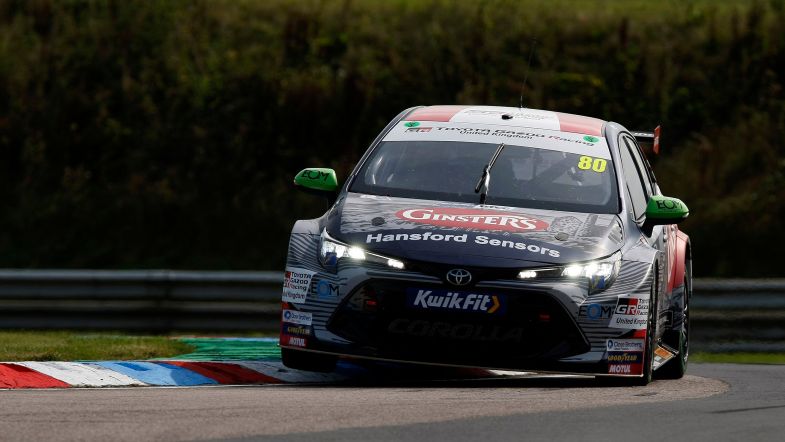 Tom Ingram doubles up at Thruxton

Tom Ingram made it two wins from two in a largely processional second BTCC race of the weekend at Thruxton.

Having opened his win account in the opening race of the weekend, Ingram started from pole and was able to keep the lead when the lights went out as fellow front-row starter Dan Cammish was slow away – allowing Matt Neal to jump up into second spot in the sister Honda.

Cammish wasted little time in getting back into second with a move on his team-mate on the second lap and then set about trying to chase down Ingram ahead.

Although he would close on the Toyota, Cammish was unable to make a move for the lead although he tried hard on the final lap on the run up Woodham Hill to the final corner.

Ingram held firm however and took the flag for the second time on the day to make it two wins from two as Cammish again followed him home across the line with second.

The podium would once again be completed by Neal in the second Honda as he was unable to keep pace with the leader pair but had the legs on Ash Sutton’s Infiniti behind.

Sutton had got up into fourth on the opening lap after a good start in the Laser Tools Racing car and edged away from the battling pair of Rory Butcher and Adam Morgan behind.

Morgan looked good to add more solid points to his tally before being forced to pit mid-way through the race with smoke coming from the rear of his car, which allowed Butcher to secure fifth ahead of Tom Oliphant’s BMW.

Both Jake Hill and Colin Turkington had been left with work to do after the opening race, with Hill charging through to eleventh in the MB Motorsport Honda and Turkington managing to get up as high as 13th as he looked to minimise his losses to Sutton in the standings.

The top eight will be reversed for race three, meaning Cook will start on pole at his home circuit.