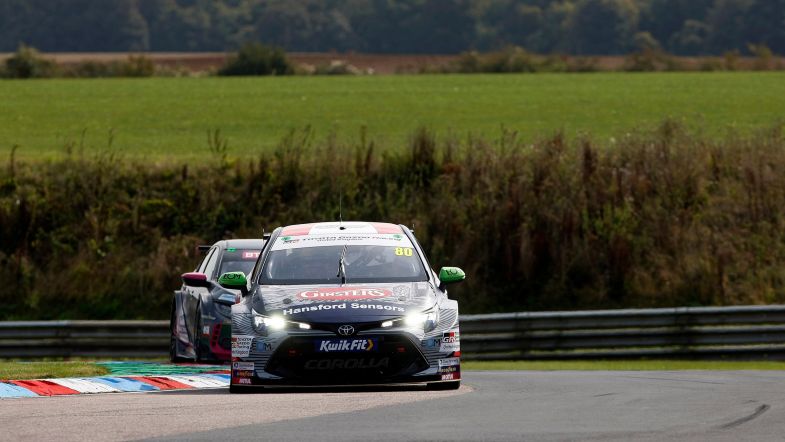 Tom Ingram secured his first win of the 2020 BTCC season after seeing off the challenge of Dan Cammish to take honours in race one at Thruxton.

Ingram made the best start when the lights went out to sweep into the lead as the field headed up to the complex for the first time, with Cammish slotting into second and Matt Neal retaining third.

In fact, the field would remain largely static at the front, with revisions to the boost available to rear-wheel drive cars at the start meaning Colin Turkington made up just one place from eighth on the grid and Ash Sutton could only climb up to eighth.

Further down in the top ten, BTC Racing team-mates Tom Chilton and Josh Cook went wheel-to-wheel through the opening tour before getting ahead for P9.

Ingram set about trying to build a lead as the leading train of five cars started to break away, with the Toyota heading the two Dynamics Hondas, the Mercedes of Adam Morgan and Jake Hill’s older FK2 Civic.

However, Hill dropped out of the battle on lap four when he suffered a puncture at the final chicane and spun before diving into the pits for a replacement.

That promoted Rory Butcher into fifth but the Motorbase man was forced had Turkington and Sutton keeping him honest.

At the start of the sixth lap, Sutton made a move up the inside of Turkington into the opening corner to take sixth spot with Turkington suddenly dropping back down the order as the BMW started to slow; the champion diving into the pits at the end of lap seven with a rare mechanical issue.

Sensing the chance to make up ground in the points, Sutton dived down the inside of Butcher at Seagrave to move into fifth place, but was now six seconds down on Morgan ahead.

Out front, Ingram was continuing to control proceedings as he maintained an advantage of just under a second to Cammish behind, with Neal slipping back from the lead pair but also keeping a clear gap to Morgan in his 250th race start.

A moment at Church on lap twelve for Ingram allowed Cammish to bring down the gap by four tenths of a second, but Ingram retained a slender advantage to take into the final two laps.

Despite Cammish’s best efforts in the Honda and a late lunge into the final corner, Ingram was able to hold on to secure his first victory of the campaign with Cammish ending up six tenths of a second back in second, and Neal making it two Hondas on the podium as he saw off the challenge of Morgan to take third – although the latter secured the Independents’ class win.

Sutton would take fifth spot in the Infiniti and with Turkington only able to take 24th after returning to action four laps down, the Laser Tools Racing driver now holds a one point lead in the standings having moved ahead of his WSR rival.

Butcher took sixth spot for Motorbase ahead of Chilton, with the top ten completed by Tom Oliphant, Josh Cook and Michael Crees.

Series returnee Rob Austin took a points finish in twelfth to surpass 1,000 points in the series with Tom Onslow-Cole in 21st in the Team HARD Volkswagen.

Amongst those to suffer issues, Nic Hamilton retired to the pits with a technical issue at the end of the opening lap whilst Carl Boardley was tipped into a spin by Andy Neate, who was running a lap down having pitted with an issue of his own early on.