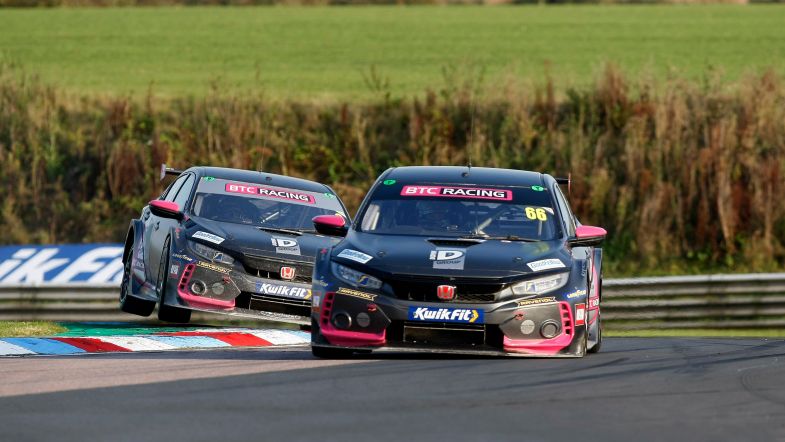 Josh Cook: “That one is for the team”

Josh Cook insisted that his race win at Thruxton was “for the team” after the BTC Racing man secured his first victory of the 2020 season.

Cook picked up victory in the final race of the weekend after leading team-mate Tom Chilton from start to finish, having battled back from a misfire in qualifying that had left him tenth on the grid.

A brace of top ten finishes in the first two races helped to set up the victory in the reverse grid final race, which came after the team had worked to repair the heavy damage Cook had picked up at Knockhill last month.

“That’s the fourth meeting in a row at Thruxton where we’ve now won – it’s just a shame we lost the lap record, but you can’t have it all,” he said. “I’m so chuffed for the team as it’s been a rough spell with the lost win at Oulton Park, and then shunt at Knockhill after a puncture that destroyed the car. I still don’t know how they got it back out on track in Scotland, never mind repaired it for this weekend…

“To be honest, it’s been a tough weekend and we have struggled with some issues on my car but the team have gone through it time after time and have been relentless in how they have worked to make improvements. I felt bad for my number one mechanic who has been a complete hero so when I was in the lead in that final race, no-one was going to be coming past me!

“That one is for the team but we need a few more now. A decent result is what we needed and now we can move on to Silverstone and look to build on it.”