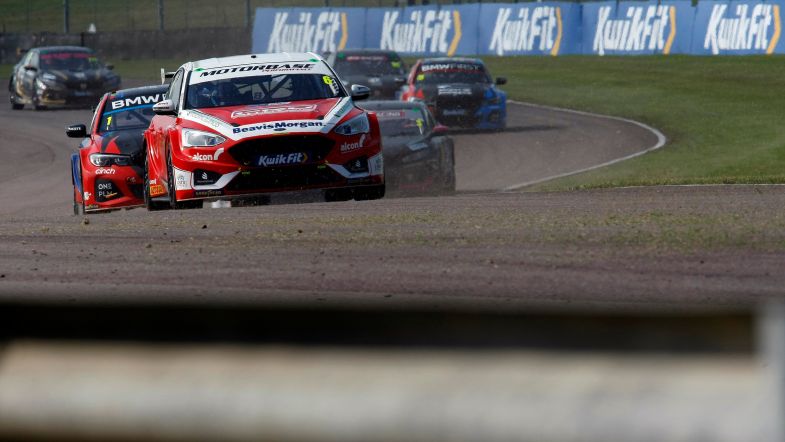 Rory Butcher insists that the Thruxton weekend was a “massive learning curve” for the Motorbase team as it competed at the high-speed Hampshire circuit for the first time with the new Ford Focus.

The latest incarnation of the Focus hadn’t run on the hard compound Goodyear tyre prior to the race weekend, with the end result being that Butcher found himself on the back foot when practice got underway.

Hard work across Saturday saw Butcher improve on his practice pace to qualify inside the top six, and he managed to secure a pair of top six finishes from the opening two races despite not having the outright pace to push for the podium places.

In the reverse grid final race however, Butcher was able to hold off the Infiniti of Ash Sutton to take third spot despite being under pressure throughout from the former series champion and he will now head to Silverstone fourth in the standings – 34 points down on Sutton.

“The podium this weekend was a hard earned as they come as Ash is a hard racer and didn’t make it any easier,” he said. “He passed me in race one at the complex and I said to myself that he’d mugged me off, but I covered it off in the final race to make sure he couldn’t repeat it.

“The rest of track is harder to pass, so I was able to hold him back to pick up a podium at the end of what became a really good weekend points wise.”

Butcher admitted however that a lack of knowledge of the hard tyre had made the Thruxton weekend a challenge.

“It’s been a massive learning curve for us as we’ve never driven on the hard tyre before, and we didn’t know what we were going to get when we arrived,” he said. “You always know quickly if things feel right or not, and we were behind the curve from FP1.

“We were firmly in the midfield in practice but we worked hard to get up the order in qualifying; the car felt so much better the moment we went on track and I only wish we’d been in that position at the of Saturday.

“This turned into a great point scoring weekend when we didn’t have the outright pace. I’m hopeful Silverstone will be more like other circuits where we have rolled the car out of the truck and it’s been quick. I feel more confident going there than I felt coming to Thruxton.”