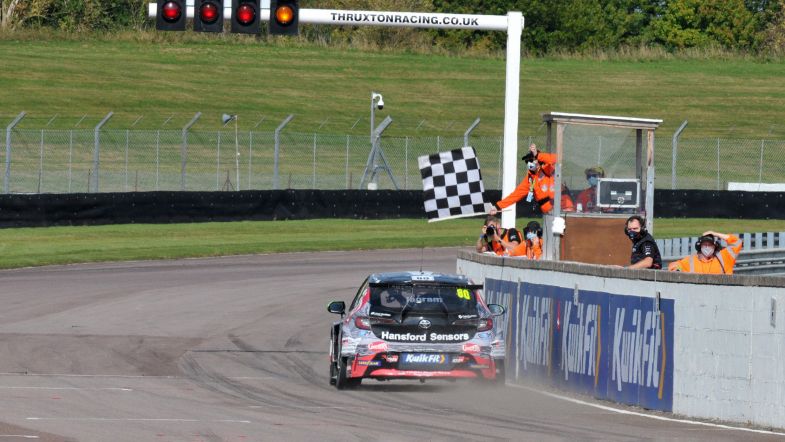 Tom Ingram insisted that he was surprised by how strong his Thruxton weekend had been after the Speedworks driver secured a pair of wins from the latest rounds of the BTCC season.

Ingram qualified on the front row of the grid despite a wild moment at Church but jumped ahead of Dan Cammish when the lights went out for the opening race – holding his Honda rival at bay through to the finish to secure a first victory of the campaign.

Another solid start in race two allowed Ingram to retain his position at the front despite the additional ballast on his Toyota Corolla and he would again keep Cammish behind to make it two wins from two.

A solid fifth place, again with maximum ballast in the reverse grid final race, means Ingram has now moved up to third in the standings and has closed to within 32 points of new points leader Ash Sutton.

“It’s been a fantastic weekend and we leave with two wins and fifth which is stellar,” he said. “I was hopeful of good weekend, but didn’t expect it to be that good.

“Dan certainly piled on the pressure in the first two races. I would briefly shake him off, but then all of a sudden, he’d be right back on me again and I knew I couldn’t afford a single slip or he would be past. He was particularly strong through the final sector of the lap, which is where the best overtaking opportunity is at Thruxton.

“I felt like we were in the power seat and I was well-chuffed to take our first win of the year. To then follow that up with another victory in race two was just awesome. In race three, I was targeting a top five finish and the strategy was always to be brave on the opening lap, which obviously paid off nicely.

“It’s been an ace weekend and I’m pleased that we can now go to a circuit in Silverstone where we won twice last season on the crest of a wave. The car is night and day different to the one we had twelve months go which shows the work that has gone into it, and it’s hugely exciting.”