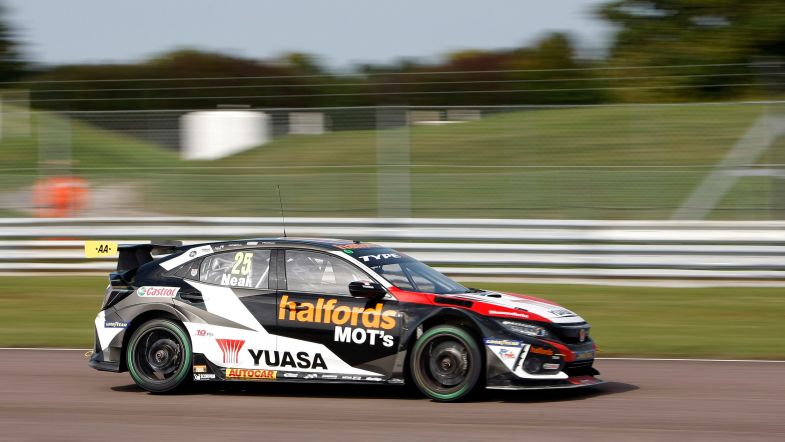 Matt Neal: “It was nice to find the podium again!”

Matt Neal admitted it had been “nice to find out where the podium is again” after a brace of top three finishes at Thruxton.

The Team Dynamics driver enjoyed his best weekend of the delayed BTCC to date in Hampshire as the Honda team celebrated ten years of partnership with sponsor Yuasa batteries with a special one-off livery on the Civic Type R FK8s of Neal and Dan Cammish.

Having qualified in third spot on the grid, Neal secured third place finishes behind Cammish in the opening two races for his first podium finishes of the season and the wrapped up the weekend with a solid seventh in race three.

It means he has now moved into the top ten in the championship standings.

“To get two double podiums on Yuasa’s tenth anniversary is nice,” he said. “The win might have eluded us but it’s been a great weekend and Josh [Cook] winning for BTC in the final race is also good for Honda.

“This has been my strongest weekend by far this season, and I found out where the podium is again! It’s a shame for Dan that he couldn’t get the win because he’s had good speed all weekend and it just seemed to come down to the starts. Tom [Ingram] had a good car that allowed him to get a gap through the complex and although Dan then pulled him in on the quick stuff, he had enough to just hold on.

“It’s a quick turnaround again now for Silverstone which is a bit of a power circuit and hopefully we’ll go well there as the engine is working well at the moment. Marginal gains are key at the moment and with a bit of luck with the traffic and things like that, I think we can be on for a good weekend.”