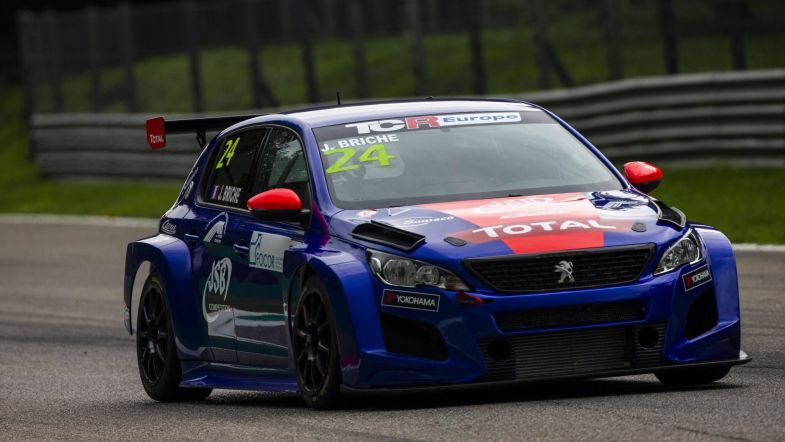 JSB Compétition’s Julien Briché topped the times in the second TCR Europe Series practice session at Monza, producing a late flyer to beat FP1 pace-setter Mehdi Bennani by over half a second.

The Peugeot driver was a lowly 15th in the rain-affected first practice but made the most of better conditions in the afternoon to emerge as the quickest driver in the 30-minute session.

Bennani was second, having headed the field for much of the session, some six-tenths of a second in arrears of Briché.

Jimmy Clairet was third in another Peugeot 308TCR, albeit nearly a second off the pace of Briché.

Brutal Fish Racing’s Pepe Oriola was the first driver to set a representative lap-time in his Honda Civic Type-R, posting a 1:59.66, some nine-tenths of a second quicker than Bennani’s first effort.

Mat’o Homola was next to top the times in his BRC Racing Hyundai i30 N TCRe, going just one-hundredth of a second faster than Oriola.

Having topped a damp morning session in his Comtoyou Racing Audi RS 3 LMS, Bennani was again quick to show his car’s pace advantage on the high-speed Monza circuit in the second session.

The Moroccan was seemingly the man to beat after setting a best time of 1:58.377, which was just over three-tenths quicker than Clairet’s Team Clairet Sport Peugeot.

Briché then got to within just eight-hundredths off Bennani with a fantastic effort, before setting his quickest time with just under five minutes remaining.

Bennani’s Comtoyou team-mate Sami Taoufik ended up fourth fastest in his Audi RS 3 LMS, while the best of the Target Competition Hyundai i30 N TCRs was Jessica Bäckman in fifth.

Homola finished sixth fastest, 1.037s off the pace of Briché, while early pace-setter Oriola was seventh.

Jelmini, a race winner this season in TCR Italy, had topped the times early in the session in his PMA Motorsport run Hyundai i30 N TCR but faded to ninth by the flag.

Next up is qualifying, which is scheduled to take place tomorrow at 10:55 CEST.