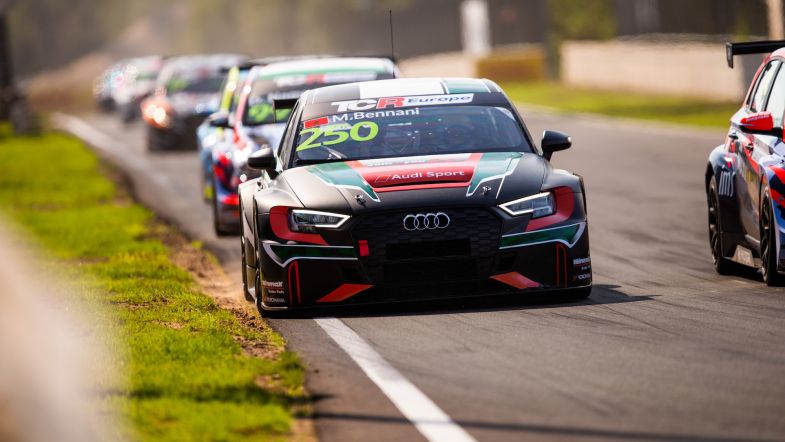 Mehdi Bennani emerged with the quickest time in a rain affected opening practice session for the latest rounds of the TCR Europe season.

The Comtoyou Racing driver, who sits third in the champoionship standings, was able to set what would prove to be the quickest time in the early stages of the session when track conditions were damp before the arrival of heavy rain rendered many of the lap times meaningless.

Bennani’s best of 2:02.814 was some two seconds clear of Mike Halder, although the Team Halder driver did have a time that was closer to that set by the Moroccan only to lose it to track limits.

Pepe Oriola was third fastest in his Brutal Fish Honda with guest driver Felice Jelmini slotting into fourth in the Hyundai that he is racing in TCR Italy.

An encouraging fifth was the debuting Fiat Tipo of the Tecnodom Sport team, with Luca Rangoni well clear of Michelle Halder’s Honda, with the top ten rounded out by Evgenii Leonov, Nicolas Baert, Dániel Nagy and Kevin Giacon rounded off the top ten.

Leonov would bring the session to an early end when he slid off into the gravel at turn four with three minutes left to run.

Championship leader Dan Lloyd was amongst those to find themselves well down the order with his fastest lap in the session being more than 16 seconds off the pace.