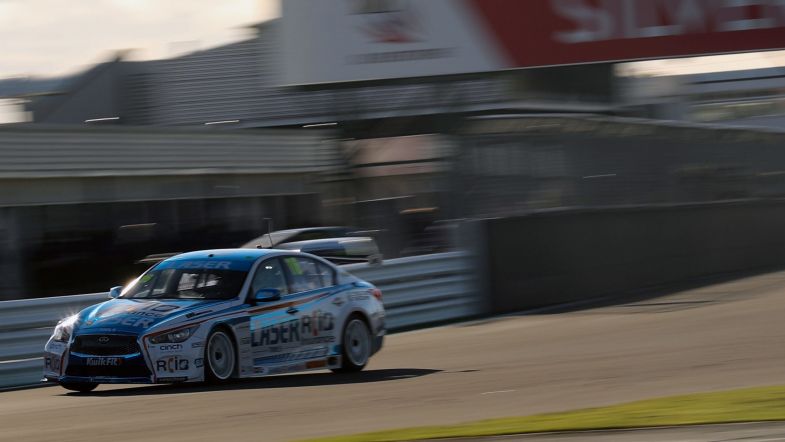 Ash Sutton made light of the additional ballast on his Infiniti Q50 to top the times in the opening free practice session of the weekend at Silverstone.

Having secured the BTCC points lead at Thruxton last weekend, Sutton carries maximum ballast into the meeting but still emerged as the fastest man in the session with a lap that was good enough to edge the Toyota of Tom Ingram out of P1 by less than a tenth of a second.

Ingram would be one driver to be warned for track limits as drivers looked to gain the maximum possible from the circuit in tricky cold conditions.

Tom Oliphant was a solid third in the first of the West Surrey Racing-run BMWs ahead of the impressive Senna Proctor in his Hyundai i30, which had been the early pace setter in the session. The two Team Dynamics Hondas of Matt Neal and Dan Cammish followed behind to round out the top six.

Adam Morgan’s Mercedes was seventh quickest ahead of defending champion Colin Turkington’s BMW, with the top ten then rounded out by Aiden Moffat and Rory Butcher.

The session would pass without drama as every driver bar Proctor managed more than 20 laps – with teams having benefited from a shakedown on Friday evening that allowed for some time on track.

Debutant Jade Edwards was 26th quickest as she prepares to become the first female driver to race in the series for more than a decade this weekend.