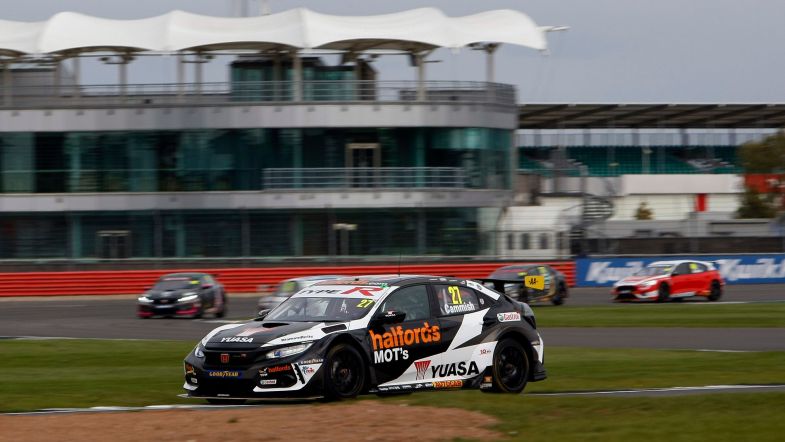 Dan Cammish snared his second straight pole in the British Touring Car Championship with a dominant performance in qualifying at Silverstone.

The Honda man had topped the times in second practice and then produced an astonishing lap in tricky conditions to put his Honda Civic Type R at the head of the field for a second weekend in a row.

The session itself would be run in changeable conditions, with the arrival of light rain making the circuit slippy and leaving drivers facing a circuit that would change lap by lap.

Before the quick laps could begin, the session would be halted after a collision between James Gornall and Jack Butel on the Wellington Straight that left the Audi stricken on the side of the circuit with a broken front right wheel.

After the session got back underway, Cammish soon started to stamp his authority on proceedings as he moved quickly into P1 and then continued to improve his time even as rain started to fall.

A best lap of 57.349s would be good enough to break the qualifying lap record as Cammish extended his lead in the Wingfoot Award standings, with Tom Ingram slotting into second place by virtue of a lap in the Speedworks Toyota; the former Indy champion having earlier been one of a number of drivers to lose a time to track limits.

Ingram’s late flyer knocked Rory Butcher off the front row as he had to settle for third spot in the Motorbase Performance Ford Focus with Colin Turkington in fourth in conditions that were far from ideal for his rear-wheel drive BMW.

Tom Oliphant starts from fifth spot in the second WSR car – with Butcher and the two BMWs covered by juyst 0.007s.

Matt Neal was a solid sixth ahead of points leader Ash Sutton in the ballast heavy Infiniti, with the top ten completed by Adam Morgan, Tom Chilton and Jake Hill.

Carl Boardley was one of the drivers lower down the order to impress as he put his BMW 125i M Sport into 13th on the grid, whilst Butel took a personal best of 20th despite the early clash with Gornall.

Jade Edwards stayed out of trouble to lap 1.2s off pole in 26th place.