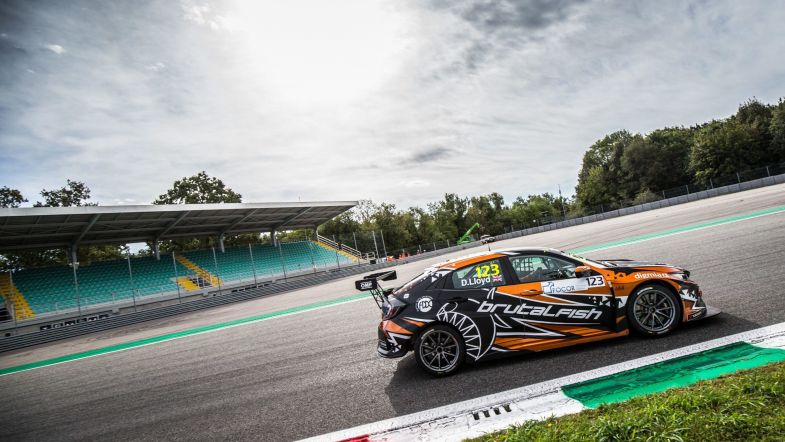 TCR Europe series points leader Dan Lloyd says that his second place finish in the opening race at Monza felt “better than a win” as the British driver extended his lead at the top of the standings.

Lloyd started second and briefly led the way having got the better of pole-sitter Mehdi Bennani off the line, before being caught and passed by the JSB Compétition Peugeot 308TCR of race-winner Julien Briché.

Arriving at Monza with maximum ballast in his Brutal Fish Racing Honda Civic Type-R, Lloyd said that he backed off in the closing stages safe in the knowledge that his main title rivals Bennani and Mike Halder were out of the race.

“I’m really happy with that – it feels better than a win, to be honest,” said Lloyd.

“My championship rivals didn’t have a good result and to come away with those sorts of points was very good. The Peugeot was definitely faster at the start, but after he got past me, I thought I had the same pace.”

Lloyd was keen to make the finish this year after being robbed of a potential victory in the corresponding first race last season. The British driver is focused on maximising his championship efforts now after another healthy haul of points.

“I had a lot of oversteer at the start so I was just pacing myself to attack at the end, but with four or five laps to go I had quite an aggressive vibration from the front left,” said Lloyd.

“At this race last year I didn’t finish Race 1 because of a puncture and I knew Bennani and Halder were out so I backed off and took the points.

“Everything we do is about the championship now and it makes a big difference to have had a full season behind me and know that I’m racing for the full year. Mega job by the team – the car was awesome.”

Nicolas Baert (3rd): “It’s unbelievable – I’m used to using that word but that was completely unbelievable! I think that was my best race of the season so far – from P8 to P3 with 60kgs of success ballast. Everybody was crashing in front of me, so I was able to pass and then of course I had to defend; it was a completely crazy race. I think I was really patient; I had to find a good position and I had to be in the right spot not to crash with anyone. That’s what helped me to finish where I did today.”