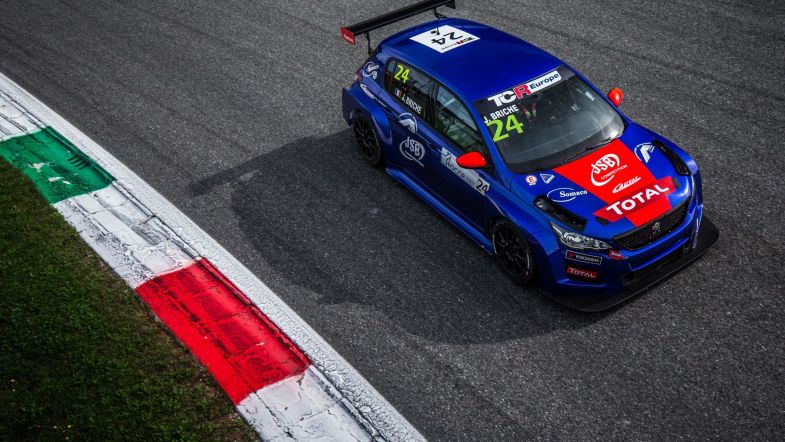 JSB Compétition’s Julien Briché claimed his first TCR Europe series victory of the 2020 season in a chaotic opening race of the weekend at Monza.

The Peugeot driver started fourth on the grid but made the most of contact between Jimmy Clairet and title contender Mehdi Bennani to move into second, before passing points leader Dan Lloyd.

Lloyd, who extended his margin at the top of the table after qualifying, finished a strong second ahead of Comtoyou Racing’s Nicolas Baert.

Off the line, Lloyd got the better of pole-sitter Bennani and outdragged the Audi into the first corner to seize the lead.

Bennani tried to fight back at the second chicane but was attacked by the Team Clairet Sport Peugeot 308TCR of Jimmy Clairet at the first Lesmo.

Clairet got a snap of oversteer and slammed into the side of Bennani who was forced off through the Lesmo gravel trap. Both Clairet and Bennani suffered front end damage, with Bennani retiring at the end of the lap.

That allowed Briché up into second place in the arguably faster Peugeot 308TCR and the Frenchman launched a successful attack on Lloyd on the second lap under braking for Turn 1.

Behind, the battle for third began to heat up as Pepe Oriola in the Brutal Fish Racing Honda Civic Type-R made contact with Teddy Clairet at the Curva Grande, dropping the pair down the field and allowing Mat’o Homola into third.

Clairet was then hit by the Comtoyou Racing Audi RS 3 LMS of Nicolas Baert at the final corner, pitching the Peugeot into the run-off area.

The Frenchman was in the wars a couple of laps later at the same corner in what looked like a brake failure. Clairet had been slipstreaming the PMA Motorsport Hyundai i30 N TCR of Felice Jelmini down the back straight before making contact with the rear of the car.

The Peugeot then did not appear to lose any speed as Clairet spun right through the run-off and gravel trap, before hitting the barriers.

The action did not stop there, as Mike Halder and Mat’o Homola’s race was ended after two incidents. Halder went around the outside of Homola at the first corner but tapped the rear of the Hyundai.

The pair then went side-by-side on the run down to the second corner, with Halder running too deep on the brakes. Halder then made more contact with Homola on exit, damaging Halder’s Honda and ripping the front-right wheel off Homola’s car.

Briché meanwhile had built and maintained a largely comfortable three seconds, and he held firm to claim his first win of the season ahead of Lloyd.

Baert claimed the final place on the podium with Jelmini heading Filippi and Sami Taoufik.

The second race of the weekend in Italy starts at 13:00 CEST.