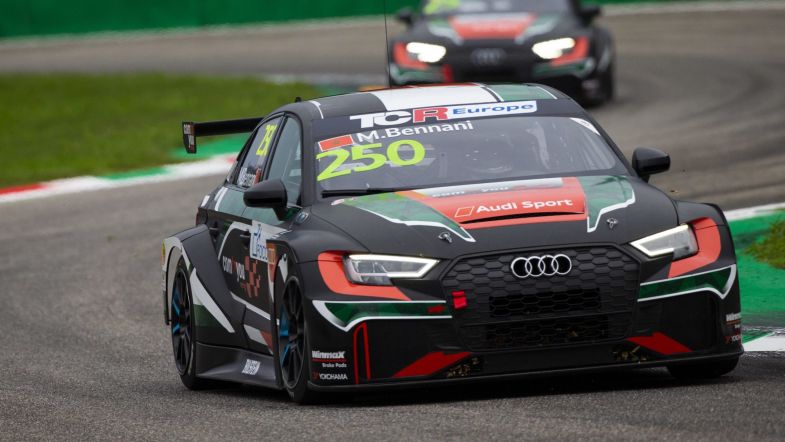 The Audi RS 3 LMS driver topped both qualifying segments and in turn picks up the 10 available points to close the gap to Brutal Fish Racing’s Dan Lloyd in the standings.

Bennani set a best time of 1:57.168 to go just three-hundredths of a second quicker than Lloyd.

Target Competition’s John Filippi will start reversed grid second race of the weekend from pole position in his Hyundai i30 N TCR.

The Brutal Fish Racing Honda driver was just over a quarter of a second quicker than Bennani, while John Filippi was the best of the Hyundais in third.

That didn’t last long though as Teddy Clairet emerged as Bennani’s closest challenger in Q2, setting a time which ended up just over a tenth of a second behind the Audi.

After struggling in practice, Oriola’s team-mate Dan Lloyd produced a superb lap to get into the second segment od qualifying in his heavier Honda Civic Type-R.

Missing out on a spot in Q2 was the Profi Car Team Halder Honda Civic Type-R of Michelle Halder. The Zolder Race 2 winner will line up 14th on the grid for the opening race.

Bennani was quick out of the blocks in Q2, posting a first time of 1:57.168, just three-hundredths of a second quicker than Lloyd’s Honda.

Behind Lloyd, Jimmy Clairet and Julien Briché were third and fourth respectively, having elected to work together to use the tow like last year.

In the end, Bennani’s lap-time remained unchallenged as much of the top 12 stayed in the pits for the final two minutes of the session.

That meant that Oriola ended up fifth ahead of BRC Racing’s Mat’o Homola, with Teddy Clairet seventh.

That does however mean that Halder is well placed for a Race 2 charge from second on the reversed grid second race behind Filippi.