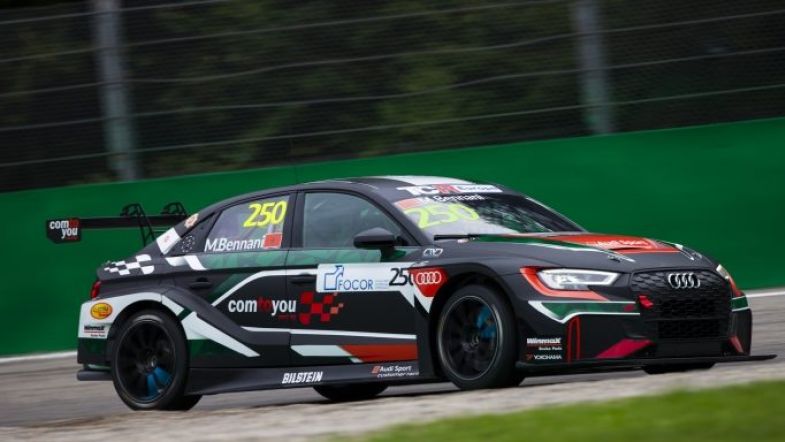 Monza Race 1 pole-sitter Mehdi Bennani says that his fastest lap in qualifying was set without the use of a tow.

The Comtoyou Racing Audi RS 3 LMS driver was quickest in both Q1 and Q2 and beat Brutal Fish Racing’s Dan Lloyd, who did have a tow, by just three-hundredths of a second.

The fast nature of the Monza circuit means that slipstreaming to get the fastest time possible is crucial.

But the Moroccan says his Audi, which has been the benchmark car at Monza since the first season of TCR Europe, was quick enough to set pole on what he called “a proper lap”.

“As I said after FP1 and FP 2 yesterday, it was only practice and we know that practice doesn’t always mean that’s how things will end in Qualifying,” Bennani said.

“Now I’m really happy because the team did a fantastic job and the Audi looks to be a great car here in Monza. I really felt confident in Q1 because we managed to do a proper time; I didn’t have any slipstream and we know that helps a lot here.

“I was trying to find something to have like a small slipstream, but I didn’t want to take any risks and maybe lose a proper lap. I’m really quite happy looking forward, because Qualifying is Qualifying and races are another story.”

For Lloyd, second on the grid was a result worth celebrating, particularly as his Brutal Fish Honda Civic Type-R TCR is heavier than Bennani’s Audi this weekend.

The points leader said: “The Audi has definitely got the pace this weekend and I think Bennani did his time without a tow, but to be P2 and so close plus a bit of a gap to P3 is a really, really good result especially when you consider the problems we had yesterday.

“We had a lot of issues and we changed the car in a huge way, so I was a little bit nervous going into Qualifying. There were a few things we hadn’t actually tried in testing, but everything worked just like we thought it would, so it was all about getting the car in the right position on the track and I managed to do that.

“I’m really happy with the whole session and fair play to the team for doing such a good job with the setup.”