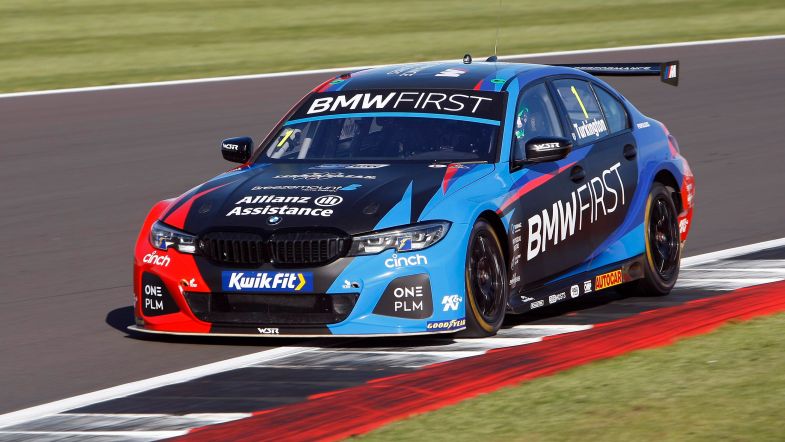 Colin Turkington has moved back into the BTCC points lead following a dramatic second race of the weekend at Silverstone saw the West Surrey Racing man secure victory.

The race started with pole man Dan Cammish holding the lead once again when the race kicked off ahead of Tom Ingram, but this time around he wouldn’t manage to keep the place for long as the Speedworks driver saw the chance to make a move going through Brooklands and Luffield on the opening lap to hit the front.

By that point, there had already been drama behind with Ash Sutton getting ahead of Turkington at Copse but then making contact with Rory Butcher at Beckets, with Butcher spinning to the back of the field and the points leader then slipping back down the order to end up in P10.

Ingram held the lead out front ahead of Cammish and Turkington for the opening half of the race before Turkington was able to make on Cammish for second going into the 15th lap, getting a run through Luffield and then completing the move as the pair headed into Copse.

Turkington then set about chasing down Ingram for the lead but before he was able to make a move for the position, Ingram hit trouble with a front left puncture that forced him to the pits. Astonishingly, that was just a lap after points leader Sutton had suffered the same issue and had to dive in to pit himself.

Ingram’s demise left Turkington with a clear lead out front ahead of Cammish and the Northern Irishman wrapped up victory for his 150th BTCC podium finish.

Cammish would be second ahead of Adam Morgan, who ran well in the top four throughout without having the pace to push for the victory, with Matt Neal rounding out the top four after a battling drive through the field that included an impressive move on Jake Hill at the final corner.

That move also allowed Aiden Moffat and Josh Cook to pass the MB Motorsport man and they would cross the line fifth and sixth, with Hill having to settle for seventh. Ollie Jackson, Tom Oliphant – from the back of the grid – and Senna Proctor rounded out the top ten.

Oliphant will now start race three from pole thanks to the reverse grid draw.