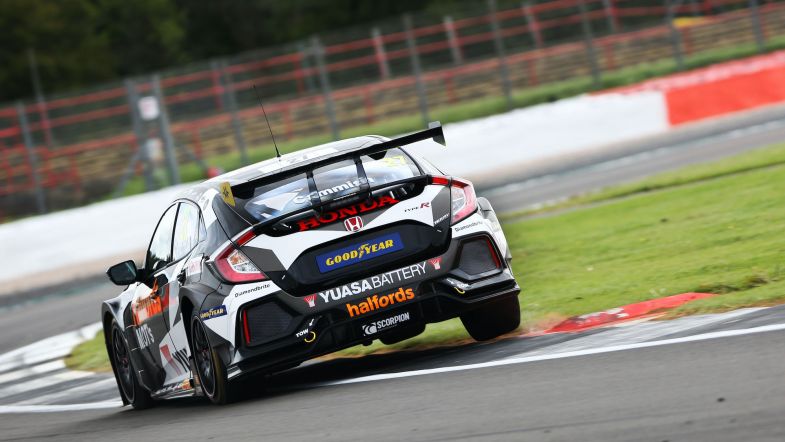 Dan Cammish converted pole position at Silverstone into a third win of the BTCC season after seeing off the challenge of Tom Ingram in the opening race of the weekend.

Cammish was able to hold the lead when the lights went out at the start despite the best efforts of Ingram behind, with the Toyota getting alongside on the Wellington Straight only for Cammish to hold the inside line into Brooklands.

Behind, Rory Butcher held onto his third place despite a tardy start ahead of Colin Turkington’s BMW, with the big winner in the top ten being Ollie Jackson who made up four spots to seventh – with Matt Neal losing four places as he slipped to tenth.

As Cammish and Ingram ran together for the lead, Butcher behind was under pressure from Turkington for third, with the pair making contact through Woodcote on the third lap as Turkington closed right onto the rear of the Ford.

That saw Turkington lose momentum but with team-mate Tom Oliphant behind, the champion was able to maintain his place going into Copse to start the next lap.

Further back, Neal and Tom Chilton had a moment at Becketts, with Chilton dropping down outside the top ten and Neal slipping behind the older Honda of Jake Hill.

The race would go under caution on lap five after Michael Crees and James Gornall clashed going into Becketts, with the end result being that Crees’ BTC Racing Honda became beached in the gravel on the outside of the circuit.

As the safety car boards came out, Ingram saw his chance to make a move for the lead into Woodcote, and although he would edge ahead of Cammish across the line, the Speedworks driver would then relinquish the position whilst the Honda was recovered and dropped back to second.

When the action resumed, Cammish and Ingram immediately started to pull away from Butcher as the Motorbase man had his mirrors filled with Turkington’s BMW.

His rear-gunner Oliphant however would drop out of the battle when his car slowed on the twelfth lap and was forced to retire, which released Ash Sutton’s Infiniti to join the fight for third.

Heading into the final five laps, Cammish finally started to eek out an advantage over Ingram at the head of the field, but there was no chance to Butcher to relax with Turkington firmly fixed onto the rear of the Focus.

As Cammish controlled things from the front to secure the win ahead of Ingram, Butcher was able to hold on to third having been aided by Sutton putting pressure on Turkington through the final lap.

The BMW driver would hold ono the position to take a few points out of Sutton’s championship advantage, as the top five in the standings locked out the top five places in the race.

Adam Morgan took a lonely sixth in the Ciceley Mercedes, and as Jackson’s challenge faded and he slipped down the order, seventh went to Hill’s Honda as he held off the challenge of a recovering Neal. Stephen Jelley and Josh Cook rounded out the top ten.

Further down the order, Jade Edwards became the first female driver to start a BTCC race since 2007 and was making good progress towards the top 20 before contact from Andy Neate late on saw her Power Maxed Racing-run Astra forced wide – dropping her down to 23rd place at the finish.

Aside from Oliphant and Crees, Jack Goff was the only other retirement after technical gremlins forced him to pit at the end of the green flag lap.