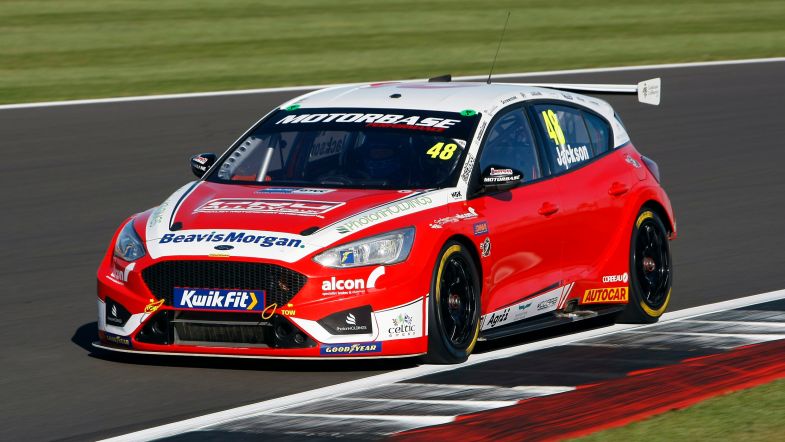 Ollie Jackson secured his maiden win in the British Touring Car Championship in an astonishing final race of the weekend at Silverstone.

It was Jackson who made the best start when the lights went out to get the jump on Tom Oliphant on the run to turn one, with Jake Hill retaining third spot from Josh Cook.

Further down the order, Tom Ingram would be prevented from trying to come through the field from the back after his race two dramas when he went off into the barriers at Woodcote having been tagged by Tom Onslow-Cole’s Volkswagen – putting him out of the race.

As the opening laps ticked by, Jackson was driving well to keep Oliphant at bay, with Hill also fending off the advances of Cook – who was all over the rear of the the MB Motorsport Honda.

However, the race would be red-flagged on the sixth lap after a huge incident involving Rory Butcher and Matt Neal on the run to Becketts.

Butcher, who had been moving his way through from 14th on the grid in rapid fashion, went to the outside of Neal on the exit of Copse which would have put him on the inside for the left hander heading into Becketts.

However, contact between the two cars saw Butcher instead sent into a high-speed spin across the grass before his car slammed into the barriers on the inside of the circuit, barrel-rolling in the air before coming to rest on the circuit on the exit of the corner where the field behind was able to avoid the stricken car.

Butcher was able to climb from the wreckage unaided, with the red flag being thrown to allow the car to be recovered and damage to the barriers repaired.

On the restart across twelve laps, Jackson was able to retain the lead ahead of Oliphant, with Adam Morgan jumping up into third spot as Hill was shuffled back down the order.

Jackson would then be forced to contend with huge pressure from behind from Oliphant, with the BMW man edging ahead briefly at the end of lap six only for Jackson to then fight back through Copse and Becketts on the following lap to reclaim the lead.

What looked set to be a huge two-way fight for the win would become a three-way battle however, as Ash Sutton produced an astonishing run through the pack having initially started right down at the back.

Blasting his way through the field, Sutton closed onto the leading pair in the closing laps, with the three cars almost tripping each other through the final corner more than once.

Heading into the final lap, Sutton launched his move on Oliphant for second and that was just enough to give Jackson the breathing space he needed to secure an astonishing win in without doubt the most action-packed race of the season to date.

Sutton’s second was a stunning way to end the weekend for the Laser Tools Racing man with Oliphant taking third, although the places would later be reversed for Sutton gaining an unfair advantage.

Dan Cammish took fourth for Dynamics – with Adam Morgan and Senna Proctor rounding out the top six having come through a frenetic battle in the midfield pack.

Cook took the flag in seventh from Aiden Moffat, with Tom Chilton and Colin Turkington rounding out the top ten.