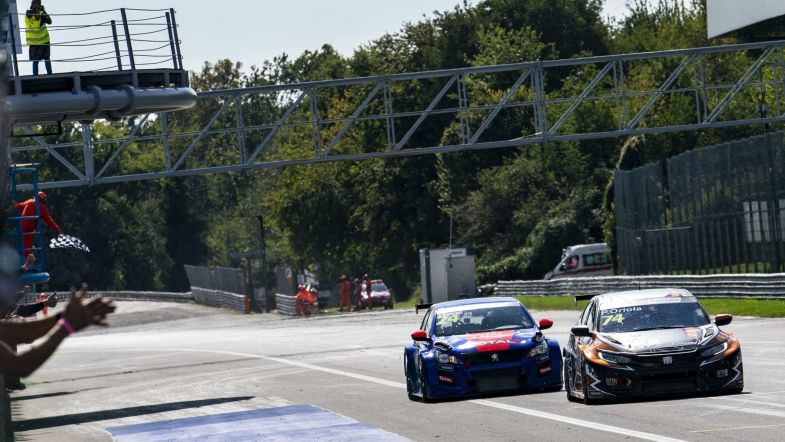 The Honda Civic Type-R TCR driver started sixth on the grid but came out on top in a 10-lap affair dictated by slipstreaming.

Off the line, pole-sitter John Filippi did not get a good start and was beaten to the first corner by the Profi Car Team Halder Honda Civic Type-R TCR of Mike Halder.

Filippi just fended off the attentions of Nicolas Baert in the Comtoyou Racing Audi RS 3 LMS, who in turn lost third place to Oriola at the second chicane.

Halder then ran slightly wide at the second Lesmo corner, which allowed Filippi to challenge the German on the run towards Ascari. Halder forced Filippi wide which then gave Oriola a clear run at the lead on the exit.

Baert, using the slipstream to his advantage then claimed second down the main straight from Halder, who would eventually drop out of contention with mechanical woes.

The key mover in the opening stages of the race was Briché, who started seventh but quickly made progress in his Peugeot 308TCR. The Frenchman made a great move down the inside of Mat’o Homola at the Parabolica to grab third.

Lloyd had been in the mix early on after passing Briché at the start. But the British driver, who still leads the points, slowed coming out of the first corner with technical problems, ultimately pulling off at Curva Grande.

Briché then made short work of Baert in a near-identical move at the Parabolica to take second, before setting off after Oriola in the lead.

The pair were clearly the fastest in the field and Briché jinked each way at the first and second chicane in an attempt to wrestle the lead from the Spaniard.

Oriola came under increasing pressure from Briché in the closing stages, with Briché going side-by-side with the Honda at Ascari as the pair squirmed under braking.

Briché made one last effort at the final corner, nearly getting ahead, but Oriola clung on to win by just over a tenth of a second.

The next TCR Europe race takes place at Barcelona on October 9-11.