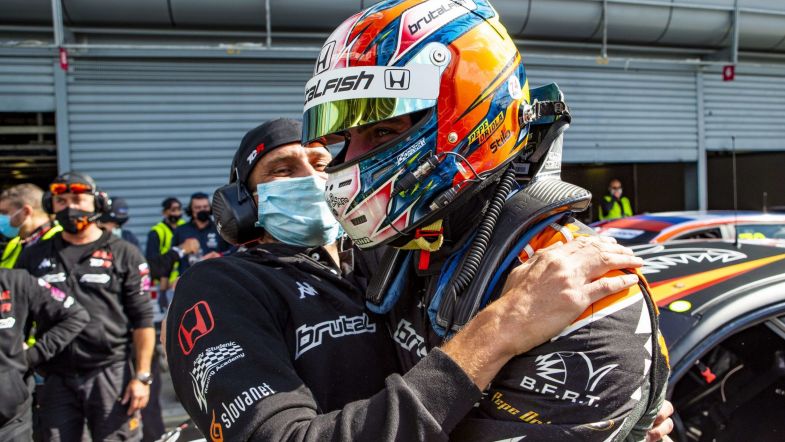 Pepe Oriola says that his TCR Europe series win in the second race at Monza was a big relief after prevailing in a “really good fight” with Peugeot’s Julien Briché.

The Brutal Fish Racing Honda driver hit the front three quarters of the way around the opening lap and stayed there despite coming under huge pressure from Briché.

Race 1 winner Briché had faster straight-line speed than the Honda, but the wily Spaniard held on firm to claim his first TCR Europe Series race win by just over a tenth of a second.

“It was a really tough [race], I managed to have a good start and everyone was pretty fair,” said Oriola.

“Then after that, I just tried to push as much as I could, but then in the end Julien had better pace, so I tried to save some tyres before he arrived.

“It was a really good fight, he had a little bit more top speed but I was a bit better in the first chicane so I managed to do it.”

Oriola has not enjoyed the same fortunes as TCR Europe Series points leader and Brutal Fish Racing team-mate Dan Lloyd, and was relieved to finally get a win this season.

“I’m really happy for the team, for the team, it’s been a f***ing hard year and to do it like is makes me really proud,” said Oriola.

“Honda will also be happy to win here as well, JAS is not so far away so to win on a circuit which doesn’t really suit us, we’re really happy.”

Lloyd continues to lead the points, ironically having extended his margin despite retiring from the second race.

Thanks to his fifth place in Race 2, Comtoyou Racing’s Nicolas Baert moves to second in the standings, 32 points adrift of Lloyd.

The German drops to fourth in the points, 51 points behind Lloyd.

The next round of the 2020 TCR Europe Series season takes place at Barcelona on the weekend of the 9-11th October.