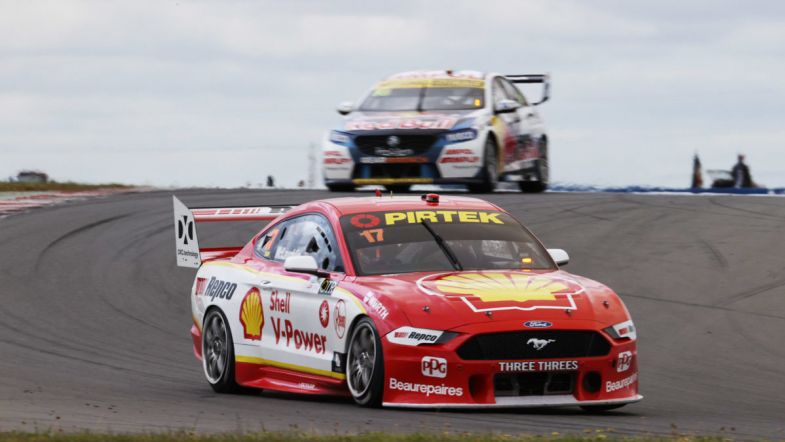 Scott McLaughlin has taken his third Supercars Championship crown in a row after today getting 300 points clear of his nearest challenger with only one round to run, becoming Ford’s first hat-trick champion in over 50 years.

The DJR Team Penske driver secured his third title with two pole positions and two podium placings in Sunday’s running at The Bend Motorsport Park, making the necessary 300 point gap over Triple Eight’s Jamie Whincup to seal the deal before the season-closing Bathurst 1000.

In doing so, McLaughlin has become the first ever driver in Supercars/Australian Touring Car Championship history to successfully win three championships with the first being their maiden victory, having edged out Triple Eight driver Shane van Gisbergen in 2018 and 2019.

McLaughlin’s championship victory overshadowed a win in Race 30 for Tickford Racing’s Cam Waters, the young gun able to finally breakthrough for his first solo victory after leading McLaughlin home in the last race of the round.

Sunday’s opening race didn’t look like it was going all McLaughlin’s way, his team-mate Fabian Coulthard seemingly controlling a majority of the race before a driveline failure for he and the Erebus Motorsport car of David Reynolds brought out the safety car.

An issue in Whincup’s pitstop dropped the seven-time champion back to seventh in the order after earlier challenging McLaughlin for second place, allowing McLaughlin to go into the final race of the weekend with a 299 buffer, essentially meaning he only needed to finish in front of the #88 car to take the title.

Starting from pole in for Race 30, he had to relegate the lead to the Tickford Racing car of Cam Waters at Turn 1, the #6 car sweeping around the outside of McLaughlin as Whincup held third place, staying under the bumper of his title rival.

Ultimately, the Triple Eight crew couldn’t give the #88 an undercut in the pits, resulting in McLaughlin coming home ahead of Whincup who couldn’t match the pace of the #17 car as Cam Waters took his first win of the 2020 season and first solo victory after his Sandown 500 win in 2017 with Richie Stanaway.