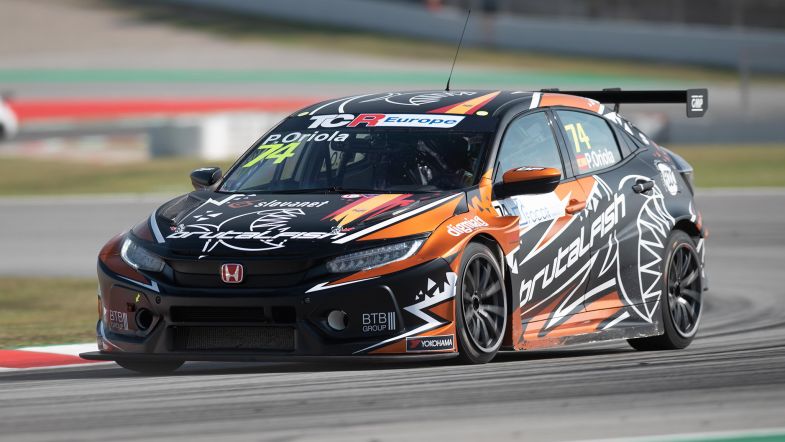 Pepe Oriola: “I’m happy I could keep the Audi behind”

Oriola started from fourth place on the grid at the wheel of his Honda Civic Type R TCR, overtaking BRC Racing Team’s Daniel Nagy at the start. The Spaniard also got ahead of BRC’s Mat’o Homola during the first lap to settle in second place.

During the last few laps, Oriola had to defend from Taoufik, who was recovering from sixth on the grid and with superior straight-line speed in his Audi RS 3 LMS.

“The fight with Taoufki was ok, given that the Audi is racing with 70 kg less, and how fast they are going in the WTCR, I’m happy to have managed to hold him behind,” Oriola told TouringCarTimes.

Oriola’s second place is his second consecutive podium, after his victory in Sunday’s race at Monza. The Brutal Fish driver believes he’s now making good progression in the season.

“I’m very happy, because finishing in second place at home is always good,” added Oriola. “It’s a shame because, if it wasn’t for the first race at Monza, this would be my third consecutive podium.

“A win at Monza, second place here, tomorrow we start from seventh place on the grid, so let’s see. I think, if we continue like this, we can get into the fight for the title, continue doing good race.”

A key issue in Saturday’s race was tyre management, with Oriola managing his tyres to reach the end of the race safely.

“Keeping the tyres was very difficult and we barely reached the end,” he said. “The difference is that Halder had new tyres and that’s why he opened a gap at the beginning, whilst I tried to hold on for longer to manage the tyres. We were a bit worried and we finished the race on the limit.”

Oriola hopes for a solid result and scoring more points in Sunday’s race.

“Tomorrow I start from P7, so my plan is to make a good start and see how far we can get, maybe finish in fourth or fifth places,” he said.