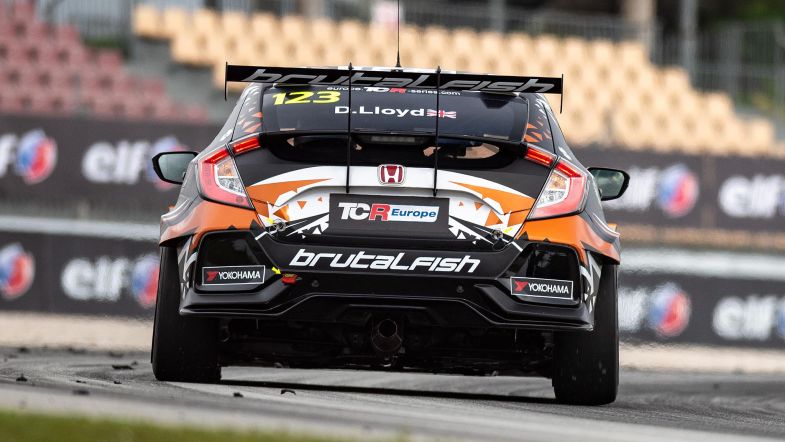 Dan Lloyd: “This weekend has been really tough for me”

Brutal Fish Racing Team driver Dan Lloyd had a nightmare fourth round of the TCR Europe series season at Barcelona, with the Briton struggling for pace with success ballast in his car and has lost the championship lead.

Lloyd’s woes started when he could only manage 13th in qualifying, having to start both races from the middle of the pack. The Honda driver recovered a couple of places in Race 1 but went wide on the last lap, falling to 16th place and out of the points.

On Sunday the situation improved and he recovered ground to finish ninth, but not without trouble as he was penalised for an incident with Mat’o Homola and moved down to 12th position.

“I was really worried as I was struggling with six laps two go and, during the last two laps, I was concerned I could get a puncture,” Lloyd explained to TouringCarTimes.

“I couldn’t go full throttle at the last corner as I got bad vibrations, which is surprising because we run the same camber than all weekend, so we weren’t expecting these issues.”

The Brutal Fish Racing driver had a gloomy summary of the situation after leaving Barcelona with zero points.

“This weekend at Barcelona was really tough for me,” said Lloyd. “We competed with 60 kg of success ballast and it has really hurt us. We were sometimes 9-10 km/h slower than the Audis in the straights, so it was really tough.

“To be honest, there are no real positives to take away from this weekend other that we’ll go to Spa with zero kilos. I think that all my championship rivals have some decent weight in, but at the moment I’m just worried about how quick the Audis will be at Spa with this big speed advantage they have over us.”

But the Honda driver is still hopeful for the next race in Belgium based on the result of last year.

“The car was good at Spa last year and it will be light, so I’m sure it will be competitive,” said the Brutal Fish driver. “The biggest worry is that the Audis have been very strong this year, even in the WTCR and we haven’t even got to the circuit where last year they were P1 and P2 by half-a-second.”

Lloyd has dropped to fourth place in the championship on 173 points, 25 behind Mike Halder.