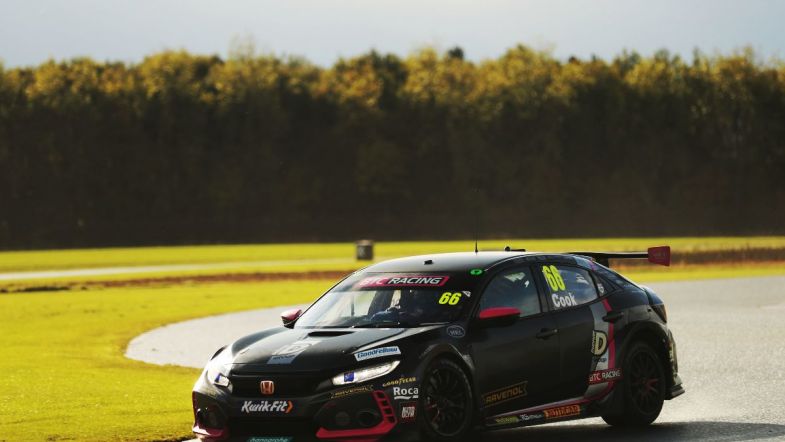 Josh Cook secured victory in the opening BTCC race of the weekend as Colin Turkington moved level with Ash Sutton at the top of the championship standings.

Starting from pole position, Cook held the lead into turn one ahead of the Turkington’s BMW as the defending champion briefly nosed ahead of Jake Hill. Hill however came back at the WSR man through turn two to reclaim the place, with Turkington being forced to defend from a fast-starting Sutton – who had vaulted up into the top four.

Sutton tagged the rear of the BMW as the pair went through Sunny for the first time but as the field came through the complex, a touch from Rory Butcher behind as he tried to make a move on Tom Oliphant was enough to tip the Infiniti into a spin.

Although everyone behind was able to avoid the Laser Tools Racing car, Sutton would drop down to 14th spot – leaving him with work to do in order to try and recover through the field.

Heading into lap two, Hill made a move to try and get the lead from Cook but was unable to make the move stick and had to settle back into second spot, with the front two remaining the same throughout.

Hill would be forced to spend part of the early stages fending off Turkington but as he dropped the BMW in the latter part of the race he was able to close back onto the rear of Cook’s FK8 Honda but couldn’t make a move for position and followed his rival home as the two front-wheel drive cars beat the much-fancied BMW to the line.

Turkington would drop away from the front two but was secure in his podium position with Butcher’s Focus not having the legs to stick with the top two, with the Scot doing all the hard work on lap one as he moved up six places from his starting position and would then remain there right to the end.

Fifth would be Sutton, after an epic recovery drive from his opening lap dramas saw him minimise his losses to Turkington – although the pair are now level in the standings as a result.

The former champion would scythe his way through the order with a number of impressive moves at the hairpin, where he was able to get ahead of the likes of Matt Neal and Adam Morgan, and also at Tower – where he dispatched with Bobby Thompson and Tom Chilton.

Chilton would hold on to sixth despite the close interests of Neal in the closing stages with Thompson’s Audi rounding out the top eight. He had suffered a scare early on when smoke started to pour from the front right of the car after the inner wheel arch dropped onto the tyre, but the issue would resolve itself as he secured his best result of the season to date.

Morgan and Dan Cammish then rounded out the top ten, with Oliphant in eleventh having dropped back on the opening lap whilst avoiding Sutton’s spinning car.