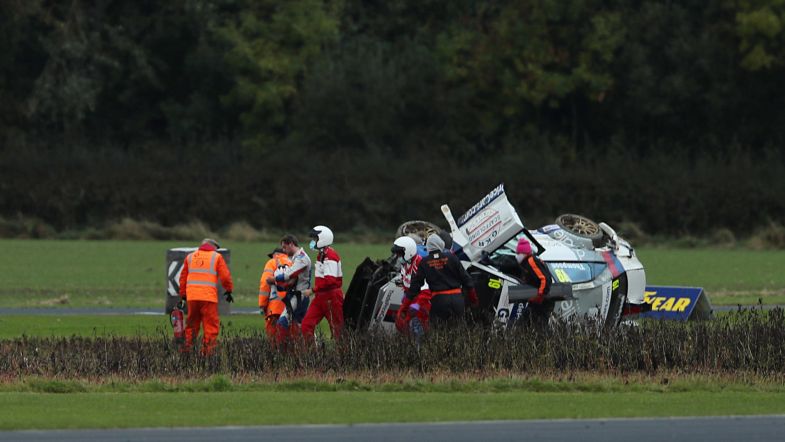 Bobby Thompson admitted he felt “battered and bruised” after being caught up in the second dramatic accident in as many rounds of the BTCC at Croft.

Following on from Rory Butcher’s high-speed shunt at Silverstone two weeks earlier, the Trade Price Cars Racing driver ended up barrel rolling across the infield at the Jim Clark Esses in the final race of the weekend.

That came after contact with the Hyundai of Senna Proctor as the pair went side-by-side on the run out of Tower saw his Audi S3 get onto the grass; sliding sideways before digging in to the soft ground and being launched into the air.

Thompson was able to climb from the car before being taken to the circuit medical centre for checks and then released to return home.

The dramatic shunt came at the end of what had been Thompson’s strongest weekend to date, with Saturday’s qualifying session having seen him secure a career best fifth on the grid.

Thompson then followed that up with eighth place finishes in the opening two races of the weekend, extending his advantage in the Jack Sears Trophy in the process to 27 points with two rounds of the season left to run.

“This has been our best weekend of the season by far and we were really strong from the moment we hit the track in practice,” he said. “Qualifying was absolutely brilliant and fifth on the grid was way than I was expecting – and it could have been even better without losing my best time for track limits.

“Race day was all about trying to stay out of trouble and focusing on the Jack Sears Trophy because there was a really good chance to extend the lead out front. The first two races were great as we were able to stick with the front runners on merit, and two top eight finishes set us up really well for race three.

“Obviously what happened there is really disappointing, but once the car was on the grass there was nothing I could do. When it dug in and started to roll, it was just a case of holding on and waiting for it to stop. I’ve been told it looked dramatic on TV, and it certainly felt like it was where I was sitting!

“I’m feeling a bit battered and bruised but I have to give a huge amount of thanks to the team for providing me with such a strong car, and I have every confidence that they can get the damage repaired so we can try to defend our lead in the rounds to come.”