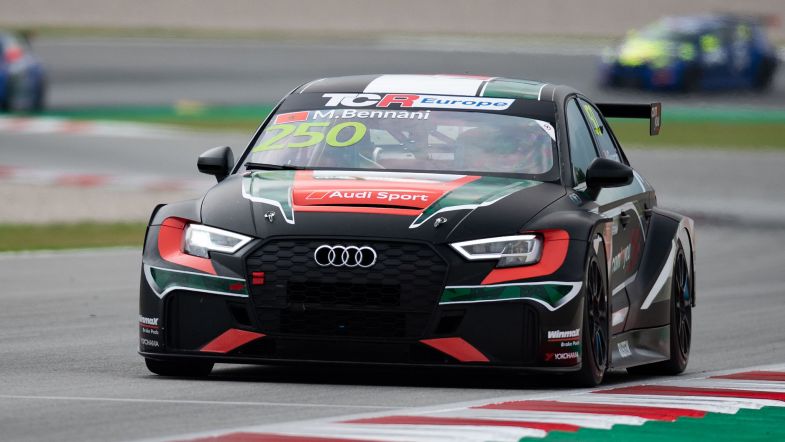 Comtoyou Racing drivers Sami Taoufik and Mehdi Bennani scored another good collective result for the team, finishing in second and third places in the second TCR Europe race in Barcelona.

Both started from the third row of the grid driving their Audi RS 3 LMS, but were overtaken by Brutal Fish’s Pepe Oriola at the start, with Bennani overtaking Taoufik and fellow Comtoyou Racing driver Nicolas Baert on the second lap.

Taoufik overtook Bennani and, after Target Competition drivers John Filippi and Jessica Bäckman collided, the Moroccan saw the opportunity to attack Oriola and fight for the podium.

“We had a rough start, I think I was down to P7 so I kind of lost hope, but the tyres started to come in and thanks to my team-mate Mehdi we started to pull through and overtake positions together,” said Taoufik after the race.

“Tyre management is a big problem in this type of car, so his plan for the race was very different to my plan and mine looks to have turned out better. I’m sure we’ll have a few more battles between now and the end of the season and hopefully we can both score points.”

“I’m really very, very happy for the two podiums that we scored for Audi and Comtoyou,” added Bennani, feeling he had driven one of his most difficult races. “If you asked me to tell you about the hardest podium result I had ever scored, I would say it was this one! With 60kg of ballast, it was like I had a passenger in the car with me and it was even worse in race conditions with older tyres.”

Bennani is now second in the championship 13 points behind Mike Halder, with Taoufik climbing to ninth place with 118 points.