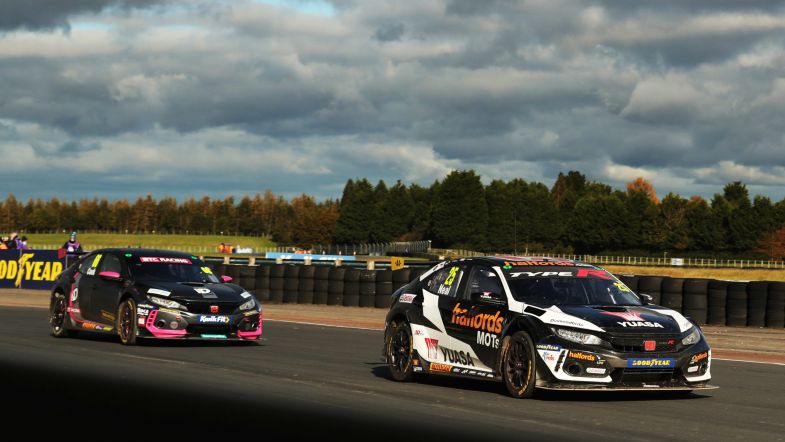 Matt Neal admitted that he “had to give it a go” in his bid to secure a first BTCC win in two years at Croft, despite being stripped of victory in the second race of the weekend.

On the back of a seventh place finish in race one, Neal had battled his way forwards into second place behind the similar Honda Civic Type R of Josh Cook when he launched a bid for the lead on the final lap – tagging Cook’s car at Sunny and then sliding through into the position.

Neal would cross the line first before officials took the decision to reverse the positions and hand a second victory of the day to Cook, with the former champion having to settle for second spot.

“The car felt great and I tried,” he admitted. “I had a run on Josh and I had to give it a go, but I’m not complaining about the result being reversed. It’s great for Josh to get two wins and of course I’d have liked to get one, but there are two meetings left to have a crack.”

Neal added a fourth place finish in race three on what was a strong weekend for the Honda teams, with Jake Hill, Tom CHilton and Dan Cammish also taking to the podium and the latter moving up to second in the championship standings despite the Croft circuit being one where the rear-wheel drive cars were expected to shine.

“All of the Hondas have done well this weekend – both us and BTC Racing, and Jake in the FK2,” Neal added. “It’s been a good weekend for Honda and also for us at Halfords Yuasa as Dan has closed in in the championship and we’ve also closed the gap in the Teams’ standings.

“There is a sense of relief over how things have gone but I also think that the BMW and Infiniti have fallen on their sword a bit as this is rear-wheel drive circuit and we’ve been lucky.

“Saying that, the next two circuits should suit us better and we have to keep our heads down and work hard. Ash and Colin will be strong but Dan is good. When it comes to a championship bid, you need allies on your side and a strong team behind you, which is what we have.”