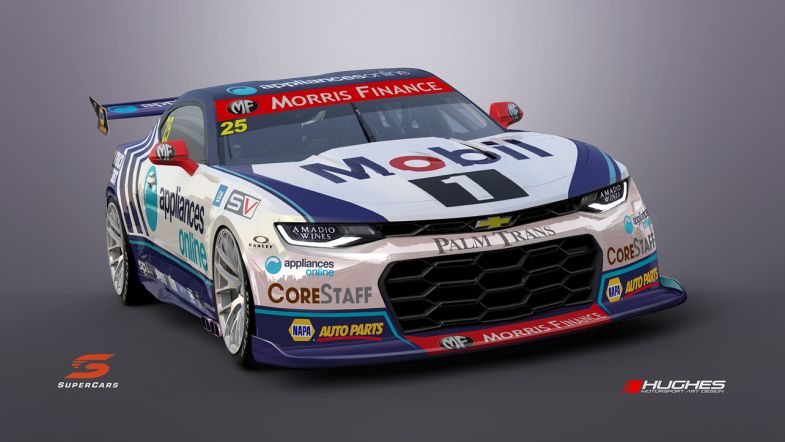 On the morning of Thursday practice for this weekend’s season-closing Bathurst 1000, the Supercars Championship has formally announced details of its new Gen3 Supercar which will come into competition in 2022, headlined by the Chevrolet Camaro making a long-awaited return to the Australian Touring Car Championship.

The overall aim with Gen3 is to reduce on running costs compared to the current Gen2 car which in itself is based off the Car of the Future platform that’s been in service since the start of the 2013 season, taking over from the Project Blueprint-spec machines.

Compared to the current crop of Supercars, the Gen3 cars will have around 200kg less downforce, be 100kg lighter, have a larger fuel tank and be 100mm lower/wider. An increased relevance to road cars also is a key to the success of the cars with Supercars still chasing more manufacturer involvement in the sport.

Supercars CEO Sean Seamer says the Gen3 cars will be sustainable for the future of the sport and will still be relevant to the history of Supercars.

“We are thrilled to welcome a brand-new race car design to the track in 2022,” Seamer said.

“The cars will retain their signature V8 engine format to ensure they’re fast and loud, but will be ‘hybrid ready’ and more closely resemble the road cars they are based on.

“These are incredible looking race cars that give a nod to the Supercar of the past, with as much attention given to the design and appearance of the cars as the new technologies.

“The Gen3 project will support the longevity of Supercars by increasing relevance to our fans and partners, reducing operating costs, and making the racing even fiercer.”

Seamer also mentioned the upcoming introduction of the Chevrolet Camaro to the category, saying it’s important that General Motors stays in the sport as Triple Eight retains its role as the homologating team for the automotive giant.

“The Camaro will play a key role in the development of our new generation of race cars, so when it hits the track, it’s sure to excite not only our younger fans, but importantly, all those who remember the nameplate’s rich history in the sport.”

Triple Eight’s Roland Dane touched on his team’s continued history with General Motors after getting onboard with Holden in Supercars back in 2010 while the Triple Eight BTCC team campaigned Vauxhalls in their formative years.

“It’s very pleasing to bring such an iconic car, the Chevrolet Camaro, back to Australia’s race tracks,” Dane said.

“Personally, I have enjoyed a long motorsports relationship with General Motors, dating back to the 1990s in the British Touring Car Championship, so I’m happy to be able to continue that.

“We’re very pleased that GM have entrusted development of the Gen3 Camaro to Triple Eight for this exciting new era of Supercars racing.

“The Camaro looks fantastic as a road car and there’s no doubt that it will make a spectacular, aggressive race car.

“Preparations for the introduction of Gen3 regulations are well underway, but our sights this week are fully focussed on delivering the best results possible for Holden and Holden fans.”

The Camaro has won the ATCC title twice, both in the hands of Bob Jane back-to-back across 1971 and 1972 while Kevin Bartlett made the Channel 9 Camaro famous in 1982 when he rolled it at Bathurst, turning it in to the “Channel 6” car.