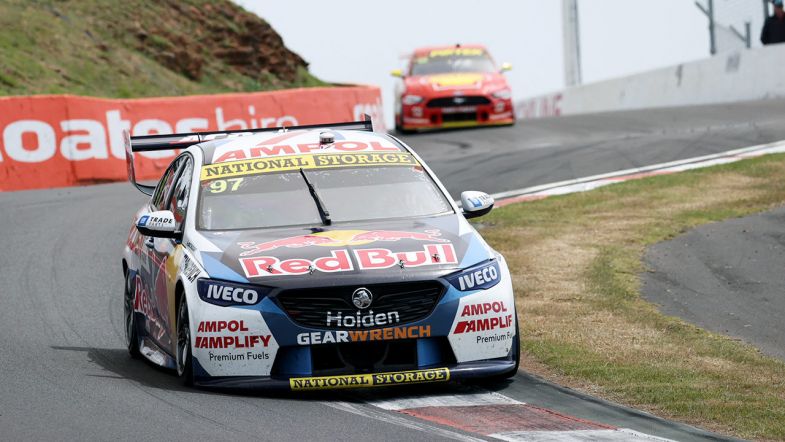 The #97 Triple Eight Holden Commodore of Shane van Gisbergen and Garth Tander currently leads the Bathurst 1000 with 100 laps completed thanks to a quick blast of rain shortly after the race’s second restart.

Threatening to happen for the past 24 hours, the racing gods finally delivered a brief lashing of rain upon the Mount Panorama Circuit which had enough of an effect to shuffle about the order of the top runners.

With Brad Jones Racing debutant Jordan Boys spinning out of the race on lap 51 into the pit wall at Murray’s Corner, the field had to face the restart less than a minute after rain started to hit the track with nearly everyone staying out on slick tyres, hoping the shower would pass soon.

It did just that but not without causing changes first. Leader Will Davison relinquished the head of the race in the Tickford Racing #6 Mustang to the hard-charging Shane van Gisbergen, the #97 Triple Eight Commodore hitting the front for the first time in the day shortly after taking second place from a struggling DJR Team Penske #17 of Scott McLaughlin.

McLaughlin lost further spots to team-mate Fabian Coulthard and Erebus Motorsport young gun Brodie Kostecki, dropping to fifth but regaining fourth place when Kostecki ran wide at The Chase after the rain stopped, van Gisbergen having to hold off Coulthard for the lead.

In the next round of pit stops, van Gisbergen handed the reigns of the #97 over to Garth Tander in the lead while the #17 jumped up to second after the stops, now with Tim Slade in the drivers seat as Davison kept behind him and Tony D’Alberto took control of the #12 Mustang.

The lead four drivers enjoyed a near 20 second lead over veteran Warren Luff in Walkinshaw Andretti United’s #25 entry, having a lonely race with a decent gap behind him to Mark Winterbottom’s #18 Team 18 Commodore which had qualified outside the top 15.

Matt Stone Racing had to retire the #35 Commodore, shared by Garry Jacobson and David Russell, thanks to an ongoing engine issue while the hard day for Brad Jones Racing continued with Nick Percat’s #8 being pulled into the garage twice to fix a misfire, rejoining the race with Thomas Randle nearly eight laps down on the leaders.

Tander continued to stretch out a lead over Slade, who was trying to conserve fuel so when he pitted he would be at his minimum lap count of 54 behind the wheel, allowing McLaughlin to take over the car to the finish, all the while Davison and D’Alberto kept the #17 car in their sights.

As the stint wore on, Slade started to make small amounts of time back on Tander while also getting more of a gap over Davison and D’Alberto, keeping a gap of just over two seconds to the car behind and staying less than six seconds away from Tander in front.

With Slade just two laps away from meeting his minimum requirement, Jack Smith put the Brad Jones Racing #4 car into the Murray’s Corner gravel trap, triggering a safety car which allowed van Gisbergen to get into the #97 but meant Slade had to stay in the #17 against a field of main drivers.

As the safety car compressed the pack, van Gisbergen held the lead with Slade still in the #17 behind, Cam Waters getting back in the #6 car with Mostert behind as Fabian Coulthard sumped behind the wheel of the #12 DJR Team Penske car, having lost a spot to Winterbottom due to double stacking behind #17.

With the race restarting at lap 100 and Waters getting by Slade nearly immediately, only 61 tours of the Mount Panorama Circuit remain in the 2020 Bathurst 1000.