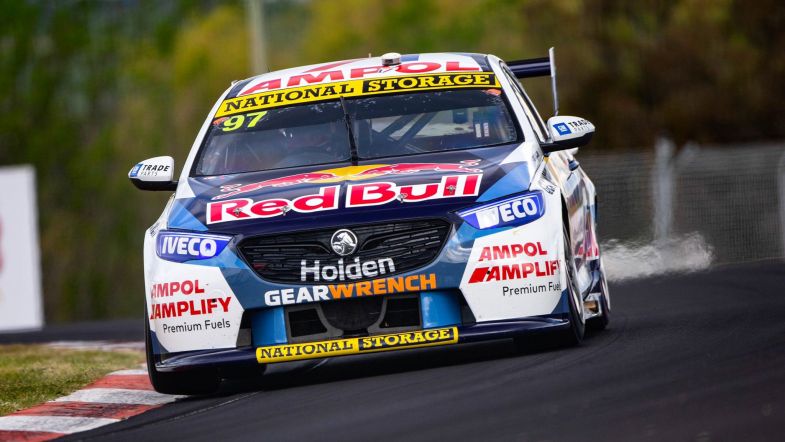 Shane van Gisbergen has finally broken through for his first Bathurst 1000 win after twice being a bridesmaid, combining with three-time winner Garth Tander in the Triple Eight #97 Holden Commodore to farewell the Australian marque from the sport.

Having dealt with intense pressure from the pole-sitting Tickford Racing car of Cam Waters in his final stint, van Gisbergen set the best lap of the race on his penultimate tour to secure his first win at Mount Panorama in a Supercar.

The closing laps of the race were marred by safety car periods, changing a spread out pack to an incredibly bunched one which included chopping the lead margin of Shane van Gisbergen to Cam Waters, the pair having battled for a majority of the race at the front of the pack.

A dogfight at the front of the field occurred in the final stints between  van Gisbergen in the #97 and Waters in the #6, split by no more than two seconds as the stint wore on meanwhile the #25 Walkinshaw Andretti United machine of Chaz Mostert set blistering pace to try and catch up with the top two.

Just behind them, the DJR Team Penske cars were engaged in their own little battle, Scott McLaughlin able to get back past team-mate Fabian Coulthard after their second last fuel stops but with the cloud hanging over his head that he’d have to take on more fuel to get home.

Mostert’s early pace proved to be unsustainable, the WAU car soon dropping back from Waters as he and McLaughlin started to conserve in the hope of making the critical lap number of 138 as the top two remained to be split by no more than a second and a half.

van Gisbergen soon tried to break the back of Waters, putting in fastest sectors but still unable to get more than a two second gap as McLaughlin had to take his final stop on lap 139, filling the #17 Mustang up with E85 as the rest of the field continued to circulate.

Mostert stopped next on lap 139, feeding out on track well in front of McLaughlin as the Team 18 #18 Commodore of Mark Winterbottom fed into the lane a lap later, rejoining behind McLaughlin with space around him.

With 20 laps to go, the two leaders pitted with van Gisbergen stretching a three second margin over van Gisbergen leading up to the stops, Coulthard also coming in to the lane. A delay in the departure for van Gisbergen thanks to Coulthard entering his pit bay allowed Waters to close up on the Kiwi, getting right under the wing of the #97 on the out lap.

Meanwhile, while the battle between the leaders resumed, Coulthard was able to pop out in front of McLaughlin, about 1.5 seconds ahead of his team-mate though the fourth and fifth placed cars were over 20 seconds off the duelling duo at the front of the pack.

As van Gisbergen and Waters traded punches, the Tickford car was on track for the fastest lap of the race until the Triple Eight Commodore beat him to it, posting a 2:05.8801 vs 2:05.8847 on lap 147, neither giving an inch with under 15 laps to run.

A new fastest lap for the race van Gisbergen of 2:05.7705 saw him open up a margin of 1.5 seconds again to Waters, seemingly breaking the back of the Tickford driver who was starting to struggle with a cool-suit issue while ingesting the hot air out of the Commodore in front.

As the race looked to almost be over, both the #4 BJR car of Jack Smith and Bryce Fullwood’s #2 WAU car had separate incidents; Smith suffering a flat tyre into the Chase as Fullwood hit the wall at the Esses, forcing the safety car to be deployed.

Waters stuck to the rear of van Gisbergen as the green flag greeted them at the restart, both the front runners putting a gap on Mostert who had to fend off the DJR Team Penske cars for the final step of the podium.

Before the lap even finished, Zane Goddard put the #34 Matt Stone Racing car into the fence at Sulman Park, the safety car being called out again but not before the field had already passed pit exit, reducing the laps left after the restart by one.

Racing resumed again with three laps left to run, van Gisbergen again getting a slight margin over Waters with Mostert keeping his former team-mate honest, getting a margin to Coulthard and McLaughlin behind in the process.

With two laps to go, van Gisbergen set the new fastest lap of the 2020 race, breaking the back of Waters and getting his lead out to nearly a second to cross the line in first, taking another Bathurst win for Triple Eight as Waters notches up his first appearance on the podium.

Chaz Mostert and Warren Luff took third place, holding out the DJR Team Penske duo of Coulthard and McLaughlin who was confirmed as the championship winner and their team the victors in the team’s championship.

Team 18 got both of their cars home in the top ten with the #20 of Scott Pye/Dean Fiore and the #18 of Mark Winterbottom/James Golding in sixth and eighth respectively, finishing either side of Tickford’s Lee Holdsworth. Anton de Pasquale (Erebus Motorsport) and James Courtney (Tickford) completed the top ten spots.