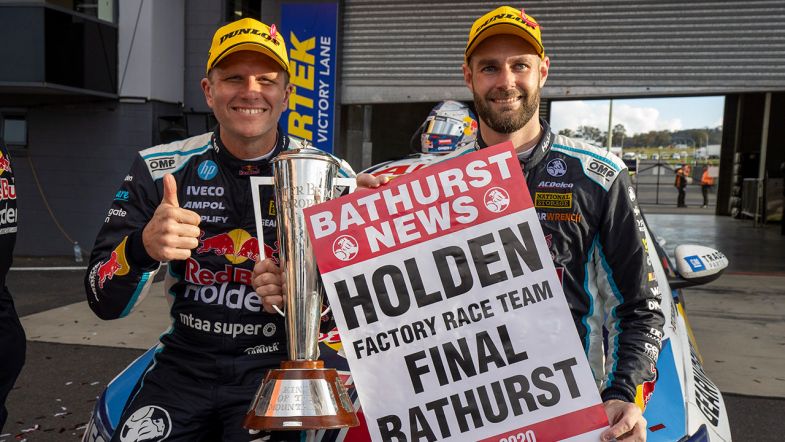 The latest Bathurst 1000 winner has hailed a faultless day as the reason why he was the victor at the end of the 161 lap race around Mount Panorama.

Shane van Gisbergen was finally able to break his hoodoo around Bathurst to take his first 1000 win with co-driver Garth Tander, their #97 Triple Eight Holden Commodore having led from lap 56 until the end of the race.

Starting fourth on the grid and struggling to make their way up the order early on, it was a brief shower that ended up with change at the front of the race, van Gisbergen getting past eventual runners-up Will Davison (sharing the Tickford Racing #6 with Cam Waters) in slippery conditions on slick tyres to take the lead, a position he and Tander held on to for the rest of the 1000km outing.

Speaking after the race, van Gisbergen was asked by TouringCarTimes.com whether he thought that leading from the front would be the key to winning the race.

“That’s what we thought would win today; track position and no mistakes,” van Gisbergen said.

“I did that stint behind Slade but it’s a waste of time because you get hot and lose aero so I did everything I could to save fuel, I got close to them but I couldn’t.

“The rain made all the difference, getting that track position but then making the right strategy calls to not give it up, give Garth a good gap and then when I went in, you could just bring it all in much nicer.

“No mistakes all day was the key.”

Post-race, he was still allowing the win to sink in and recalled how much he enjoyed the dogfight with Waters in the closing stints towards the chequered flag.

“It’s pretty cool, (I) gave my mum and dad a call, they were pretty stoked and liquored up as well!

“It was awesome, those last 60 laps were just flat out the whole way; it was intense but quite enjoyable.

“The last eight weren’t with the safety cars because Cam was quick at the start of the stints then would fade but our car got better and better. I’m pretty thankful it didn’t keep raining, the car went quicker as more rubber went down.

“When I got in during that last stint, to do low 2:06’s the whole time was pretty cool.”

The win for van Gisbergen and Tander is the last for Holden with the brand wrapping up in Australia at the conclusion of the year, racking up 34 Bathurst victories in the company’s history. Though teams will run the Holden Commodore bodies next year, they will do so without Holden still participating in the Australian car market.