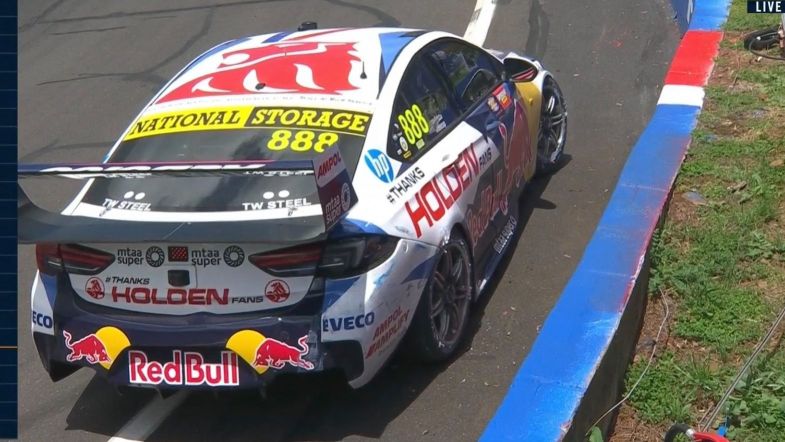 Whincup/Lowndes out of Bathurst 1000 after crash

The Triple Eight car of Jamie Whincup and Craig Lowndes is out of the 2020 Bathurst 1000 after Whincup crashed on lap 33 at The Cutting, running wide into the concrete wall while battling for third place.

Starting ninth on the grid in the hands of seven-time Bathurst winner Lowndes, the car was handed over to Whincup in fifth place on lap 20 when the first round of pits stops were completed, the main driver taking the helm of the #888 Holden Commodore for the second stint.

While battling Brodie Kostecki in the #99 Erebus Motorsport car, Whincup had been pushing to pass the young gun for a few corners, eventually getting a run on the outside of the Cutting after jamming the #888 on the inside at Griffin’s Bend before running onto the grey side of the track, ultimately losing grip and ending up in the concrete.

One of the predicted cars to take a podium result, the DNF result for Whincup and Lowndes is the first that either have failed to finish at Bathurst since 2002 and ends their campaign for a fourth win together at Mount Panorama.

Racing continues with car #17 of Scott McLaughlin and Tim Slade having led the most laps for DJR Team Penske though the #6 Tickford Racing Ford Mustang of Cam Waters and Will Davison currently leads the way on lap 36.