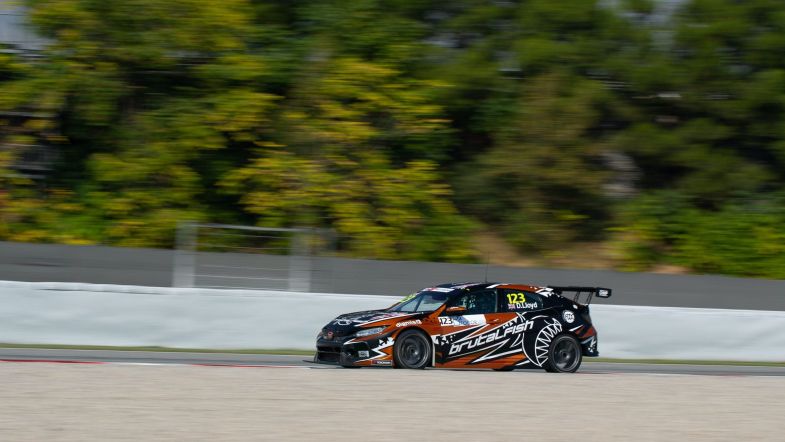 The Brit, driving a Honda Civic Type-R, posted a time of 2:31.468 on his final lap of the 30-minute session, going just two-hundredths of a second quicker than Target Competition’s Andreas Bäckman.

Bäckman, in a Hyundai i30 N TCR, had been top of the times for the majority of the session but was usurped in the final seconds by Lloyd’s best effort.

The Peugeots replicated their 2019 Spa form by filling the next three positions, led by Team Clairet Sport’s Jimmy Clairet.

Brother Teddy was fourth quickest in the second of the Team Clairet Peugeot 308TCRs, while JSB Compétition’s Julien Briché was fifth fastest.

In much the same way as Peugeot, the Comtoyou Racing Audi RS 3 LMS’s also finished inside the top 10 in order.

Sami Taoufik was the best of the bunch with the sixth quickest time, ahead of title contenders Nicolas Baert and Mehdi Bennani.

The Spaniard’s first effort of 2:33.993 was the first benchmark of the session, going two-hundredths faster than Baert’s Audi.

Teddy Clairet then went quickest, while the BRC Racing Hyundai i30 N TCR of Dániel Nagy was just a tenth further back in second.

Bäckman and Bennani then traded fastest times in quick succession before Lloyd arrived at the top.

Series returnee Nicolas Baldan was an impressive 13th for Élite Motorsport, completing his first competitive session since Paul Ricard in 2018.

It was however, a difficult session for both ProfiCar Team Halder drivers, Mike and Michelle Halder.

Points leader Mike ended the session 17th fastest, over two seconds off the pace, while Michelle could only manage 20th.

The next session for TCR Europe is FP2, which is scheduled to take place on Friday morning at 09:00 CET.