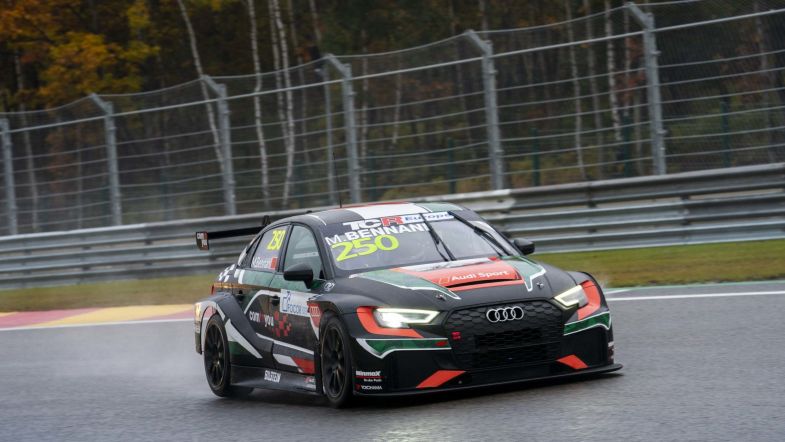 The Moroccan set a time of 2:42.275 as track conditions improved dramatically over the course of two qualifying segments, beating Boutsen Ginion’s Tom Coronel by just over two-tenths of a second.

That margin was comparably large compared to the majority of the session, with times plummeting with each lap and the top five in Q2 being split by hundredths of seconds.

BRC Racing’s Mat’o Homola was tenth in the session and therefore will start Saturday’s second race from pole.

With the track still damp from the morning session, conditions remained a challenge for the bulk of the field, with Nicolas Baldan having to abort his first flying lap in his Élite Motorsport Cupra León Competición after locking his brakes at La Source.

There was also trouble for JSB Compétition’s Julien Briché, who pirouetted at the final corner while on course to set the fastest time in his Peugeot 308TCR. He eventually qualified 17th, just ahead of brand stablemate Jimmy Clairet.

Comtoyou Racing’s Nicolas Baert initially set the pace, but he too was to fall out of the top 12 required to progress to Q2. The Belgian, who took his maiden win at Zolder earlier in the season, qualified 13th, just ahead of TCR Europe Series returnee Mikel Azcona (Volcano Motorsport).

As for team-mates Bennani and Taoufik, the Audis were in a class of their own, lapping sometimes two or three seconds quicker than the rest of the field.

They comfortably topped Q1, while Lloyd snuck into Q2 with a late effort to go third quickest.

Bennani led the way early in Q2 but a flurry of quick times as the track began to dry out even more followed.

Taoufik then went fastest before being beaten by Lloyd, who survived a big slide at Blanchimont to go quickest. Such was the changeable nature of the circuit, Target Competition’s John Filippi, Coronel and finally Bennani each took their turn at the top of the times before Bennani made sure with his last effort.

Behind the top two, Filippi was third while Andreas Bäckman lines up fourth, ahead of Lloyd.

Taoufik ended up sixth (although he will start from the back of the grid after a engine change following second practice), with José Manuel Sapag bagging a career best seventh for Target Competition. Taoufik’s penalty however, only applies to Race 1 and he will start Race 2 fourth on the reversed-grid.

Mike Halder inherited seventh as a result of Taoufik’s grid drop, ahead of Pepe Oriola and Homola.