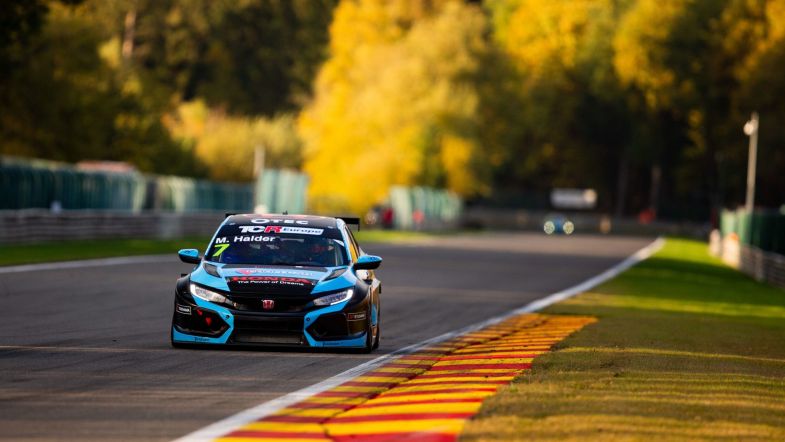 TCR Europe series points leader Mike Halder says more rain is key to performing well at Spa-Francorchamps this weekend, after making the most of a wet set-up in second practice.

The Team Halder Honda driver is carrying 60kg of ballast in his Civic Type-R TCR this weekend which hampered the German’s progress in a dry opening practice, but paid dividends in Friday morning’s wet session.

With weight playing less of a role in slippery track conditions, Halder is keen for the rain to return, despite qualifying set to run on a dry track.

“We had a lot of set-up problems in FP1,” Halder told TouringCarTimes.

“Because Spa is a new circuit for us as a team, we had no reference on what the optimum set-up would be.

“And even more, we have 60kg of weight, which has a big impact in dry running, so we were quite slow as a result in FP1.”

Halder, who runs the small Team Halder outfit, made significant set-up changes following opening practice, where he ended up 17th fastest, while sister Michelle was 20th in the second Honda, and believes he has found a good compromise for wet conditions.

“We made some changes and I was trying the dry setup in that [wet FP2] session, so at least we know some of things we will need to run for qualifying.

“For the races, for sure we need to have more rain because that makes it a little bit more easy for us [to compete at the front].

“We need to be top 10 and to score points for the championship. With the set-up, we can afford to take a risk in wet conditions, but in the dry, we need to play it safe as well.”