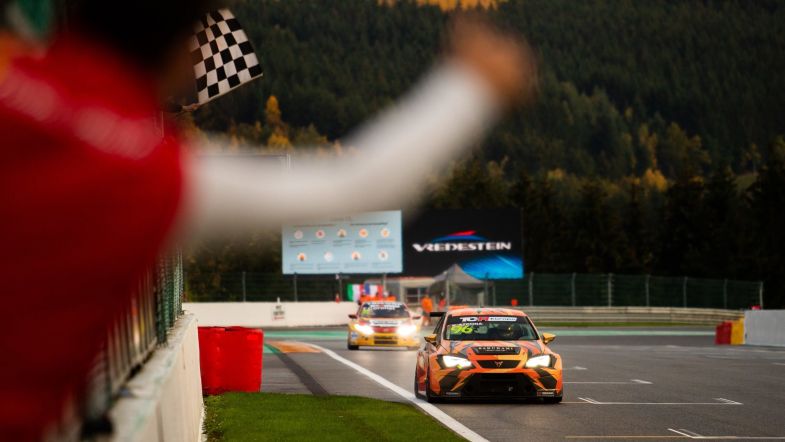 The 2018 Series champion, making his first appearance since his title-winning campaign, started 13th on the grid but showcased his wet-weather prowess by snatching victory around the outside of Blanchiment with two laps to go.

Coronel had led from the first lap either side of a safety car intervention and looked like securing his maiden Series victory, but the Dutchman, driving a Boutsen Ginion Racing Honda Civic Type-R TCR was denied by Azcona’s brilliance at the end.

Behind the top two, Mike Halder extended his championship advantage with the final step on the podium in his Halder Honda Civic.

Pole-sitter Mehdi Bennani led off the line as fellow front-row starter Coronel had to defend heavily from Target Competition’s John Filippi at La Source for the first time.

Coronel eventually staved off that attack and then snatched the lead from Bennani exiting Pouhon before the safety car was deployed to recover the stricken cars of Jessica Bäckman (Target Competition) and Nicolas Baert (Comtoyou Racing).

Bäckman had looked to get around Baert exiting Les Combes having taken a tighter line, but Baert took his normal line into Malmedy and the pair made contact. Bäckman went careering into the barriers while Baert beached in the gravel. Both emerged unharmed in the incident.

Coronel led away at the restart as Bennani struggled for traction exiting the final corner. The Moroccan in the Comtoyou Racing Audi RS 3 LMS quickly fell back down the order, with Filippi getting by around the outside of Turn 11, before Halder did likewise at Paul Frère.

Mikel Azcona was the next to swing by the Audi, having worked his way up from 13th on the grid. The 2018 TCR Europe series champion closed in on Filippi, passing the Frenchman on lap six of nine for second.

Azcona then set about trying to close in on Coronel for the lead and halved Coronel’s lead with three laps remaining. It was reduced to less than a second as the pair went onto their penultimate lap, with the Spaniard executing a sensational manoeuvre around the outside of Blanchiment to seal the victory.

Halder got the better of Filippi for third after almost a lap of move and counter-move between the duo. Halder got the outside line for both Pouhon and Stavelot but only made the move stick for good on exit of the latter as Filippi drifted slightly wide.

Another star performance was that of Sami Taoufik, who charged through the field from 21st on the grid following a post-practice engine change. The Comtoyou Racing Audi RS 3 LMS finished seventh ahead of Brutal Fish Racing’s Dan Lloyd.

Race 2 at Spa-Francorchamps is scheduled to take place on Saturday at 11:50 CEST.