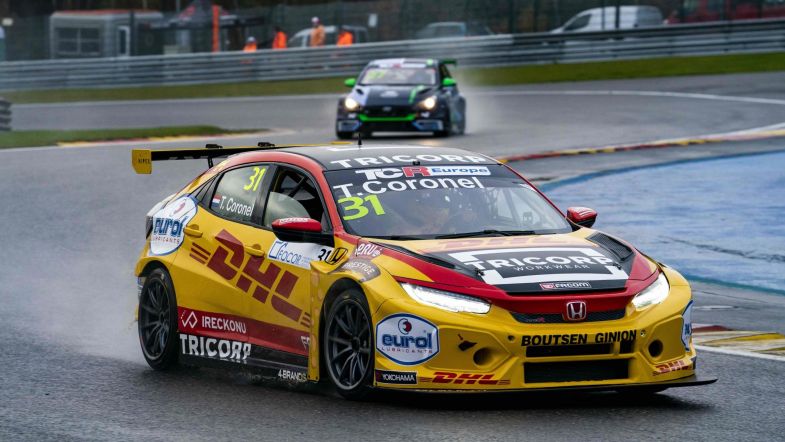 Boutsen Ginion Racing’s Tom Coronel said he was surprised to end up on the front-row of the grid for the opening TCR Europe race of the weekend at Spa-Francorchamps.

The popular Dutchman steered his Honda Civic Type-R TCR to the second fastest time behind pole-sitter Mehdi Bennani, making him the best-placed Honda ahead of Race 1.

Coronel, who this week announced his participation in the remaining two rounds of the TCR Europe series season, said that his experience of changeable conditions played a part in his qualifying performance.

“To be honest, this result is a big surprise!” Coronel said.

“I think in this case, it’s one of those things when experience is really important and our call was really the best one.

Like others in the field, the choice of using wet tyres for consistency or gambling on slicks in search of the fastest time was particularly difficult to balance.

But Coronel said his team’s decision to boot dry weather rubber onto his car, paid off in the end.

“I was pushing the front tyres and told the guys to put them on the rear, so we had full slicks. It was dirty at the entries to the corners and there was oversteer, but I decided to use full slicks and it worked out

“On the last two laps, it started to rain, and I thought ‘uh oh, we could be in trouble’ but that was it and I was reasonably happy.

“I know I won’t stay in P2 as the other guys are faster than me on the straight and so I will be a sitting duck, but I will happily take this moment of fame!

“The confidence is always there, in fact I think my problem is over-confidence which is my handicap, but it also helps like in this case.”

This is Coronel’s best Race 1 starting position since the penultimate round of the 2019 season at Barcelona, where he qualified seventh. Coronel’s only two podiums in TCR Europe came at Oschersleben last year, finishing twice second to Dan Lloyd and Andreas Bäckman respectively.