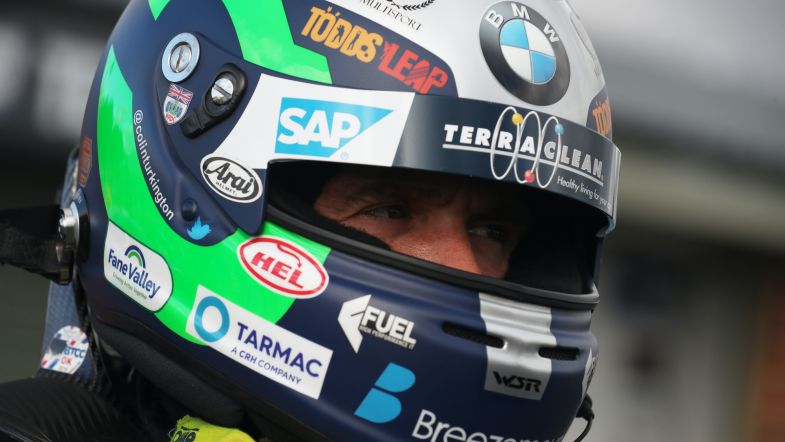 Colin Turkington posted the fastest lap in the BTCC’s first ‘Top Ten Showdown’ qualifying session to snare his second pole position of the season at Snetterton.

With the series adopting a new qualifying format for the weekend, the opening 25 minutes of session would determine positions 11-27 on the grid, with the top ten drivers going through to Q2 where all times were reset and a further ten minutes of running would decide who started on pole.

Defending champion Colin Turkington was the early pace setter in Q1 as he set a time of 1:57.862 to go to the top of the times; that lap being around half a second off the pace set by Jake Hill in practice.

Team-mate Tom Oliphant would slot into second before losing his time to track limits, leaving Dam Cammish to instead go second quickest in his Honda Civic Type with a lap just 0.011s slower than the BMW – only for Motorbase duo Rory Butcher and Ollie Jackson to then vault ahead in their Ford Focus STs.

Hill was next to lead the way in his FK2 Honda Civic Type R only for Turkington and Butcher to both improve – with Tom Ingram and Adam Morgan the next two drivers to take turns in P1 as lap times dropped.

With ten minutes of Q1 remaining, points leader Ash Sutton and Croft winner Josh Cook were the big names missing from the top ten down in 25th and 26th spot, with Sutton having posted a best time nine seconds off the pace and Cook yet to set a time.

As Butcher improved his fastest time to set the quickest lap of the day so far, Sutton set about making his move up the order with less than eight minutes to go, with his first true lap putting him up to eleventh – just 0.001s away from the top ten.

However, in a matter of seconds, Sutton was stripped of the time for exceeding track limits, leaving the Laser Tools Racing man to go again as the clock ticked down to under five minutes.

Sutton’s next time was good enough for ninth spot but left him firmly in the danger zone – with improvements behind, most notably from Cook, meaning the points leader soon found himself in tenth.

As the chequered flag flew, Butcher topped the times in the Motorbase Ford from Morgan and Sutton as he secured his place on the final lap, with Ingram, Aiden Moffat and Tom Oliphant rounding out the top six – the latter also leaving it late after having what had been his quickest lap removed for track limits.

Turkington, Hill, Ollie Jackson and Dan Cammish rounded out the top ten – with Cammish only just making it through after losing his fastest lap.

With Snetterton being the longest circuit on the calendar, there was no time to waste when Q2 kicked off, with almost half of the ten minutes being run before Ingram set the first quick lap on a 1:57.634 – four tenths down on Butchers fastest lap in Q1.

Ingram then improved to a 1:57.202 for the fastest lap of the day, with Hill going purple in sector one to go second quickest from Oliphant, Sutton and Turkington.

Sutton however would once again lose his time to track limits, dropping him down the order with a potential two laps remaining.

With little more than a minute of the session remaining, Hill moved the MB Motorsport Honda into provisional pole by just 0.018s despite Ingram also improving, with Morgan’s Mercedes going third quickest before he lost his time to track limits.

As the chequered flag came out, Turkington went under the 1:57s mark to put the BMW onto provisional pole and that lap would prove to be enough to give the defending champion his first pole since the season opener at Donington Park.

Hill had to settle for second place for the third time this season, and second event in succession, with Ingram third in the Toyota that had qualified on pole twelve months ago.

Butcher was fourth fastest ahead of Cammish and Sutton, with Oliphant, Jackson, Moffat and Morgan completing the top ten – the Ciceley man failing to set a representative time.

Outside the top ten, Senna Proctor was the best placed driver not to secure a place in Q2 ahead of Josh Cook, whilst there was disappointment for Matt Neal – who could only qualify down in 16th place after a spin at the final corner.

Paul Rivett was quickest of the newcomers in 20th place in his Trade Price Cars Racing Audi, with Jess Hawkins two places back in 22nd. Glynn Geddie and Ethan Hammerton were 24th and 25th, with Nicolas Hamilton failing to set a time due to a driveshaft issue.