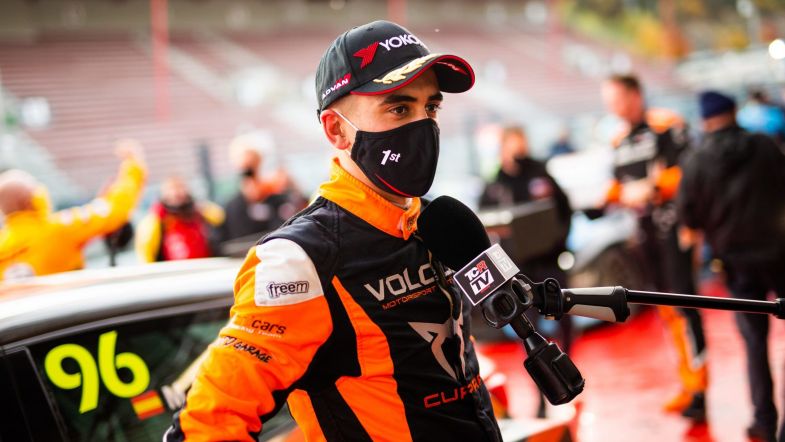 Mikel Azcona says he will decide whether he will enter the TCR Europe series season-finale at Jarama in the coming weeks after his double victory at Spa-Francorchamps.

The Volcano Motorsport driver, who won both races in an older generation Cupra this weekend, initially entered the penultimate round of the year as a one-off appearance but now it appears the Spaniard is open to continuing for the final round on home soil.

Azcona was the class of the field in each of the weekend’s races, utilising a combination of wet and dry tyres to charge from 13th on the grid to win twice.

“It was a perfect weekend for us, except for the qualifying,” Azcona said post-race

“In both races we had the best combination of tyres, with slicks on the front and wets on the rear, also I could manage the car perfectly on the lines.

“Starting from P13, it wasn’t easy at the beginning; I had some contacts and I had to be careful to avoid hitting any of the cars around me. Finally, I overtook Pepe – he was on full wets and he was slower than me.

“The car worked very well all weekend and I am very happy with everything; the CUPRA was very fast but at the same time I was struggling at the end of the second race with the balance of the car, so I was drifting everywhere.”

The 2018 TCR Europe Series champion added that his successful return to the series has given him motivation to take part in the final round at Jarama just outside Madrid.

He said: “I enjoyed the races – I told my parents after the first race that I love racing!

“The original plan was not to go to Jarama, but now maybe we will go.

“We will have to think carefully about that; it’s my home track and I know it very well, so to finish the championship in Spain would be a good idea.

“We are thinking about it for sure, but it’s not certain yet.”

While Azcona’s double victory was the main highlight, the race for the TCR Europe title also took another twist in favour of Team Halder’s Mike Halder.

The German extended his points advantage over Mehdi Bennani to 26 points heading into the final round of the season.

Early season points leader Dan Lloyd (Brutal Fish Racing) is still in contention for the title despite his Race 2 retirement, but is 48 points adrift of Halder.

The 2020 TCR Europe Series concludes at Jarama on the weekend of the 7-8th November.