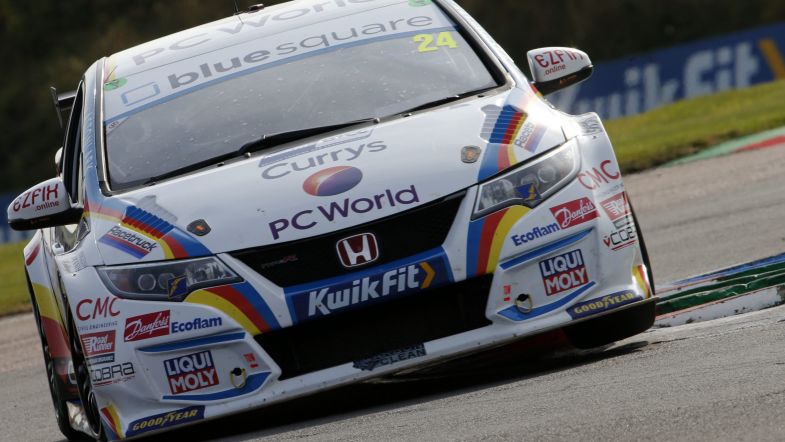 Jake Hill topped the times in the sole free practice session ahead of the penultimate meeting of the BTCC season at Snetterton.

The revised schedule for the weekend saw drivers given just one 50 minute session as opposed to the usual pair of 40 minute sessions in order to allow more support races to be run on Saturday – given the later end to the season and the resultant reduction in daylight hours.

Aside from a brief stoppage after Ethan Hammerton suffered a spin in his Trade Price Cars Racing Audi S3, the session would run without any major dramas and Hill would emerge as the man to beat in his MB Motorsport-run Honda.

Hill left it late to set a time of 1:57.320s which was half a second quicker than the Mercedes of Adam Morgan, but nearly two seconds off the lap record – down in no small part to the fact that track temperatures were below 8°, rather than the warm conditions that usually greet teams in Snetterton’s traditional August slot.

Third quickest in the session was another driver who left it late to post their quickest time, with Michael Crees vaulting up into third in the closing seconds at the wheel of his BTC Racing Honda.

Crees – who has dropped to third in the Jack Sears Trophy standings after difficult weekends at both Silverstone and Croft – bumped defending champion Colin Turkington out of the top three, beating the BMW driver by just 0.26s on his final run.

Turkington had spent a chunk of the session on top of the times despite the additional ballast on his car, with Rory Butcher and Dan Cammish – now ahead of Turkington in the standings and therefore carrying more weight on his Honda – rounding out the top six.

Tom Ingram’s Toyota was seventh quickest ahead of Josh Cook, another driver to spend a large period of time in P1, with Tom Oliphant and championship leader Ash Sutton rounding out the top ten.

Jess Hawkins was quickest of the four newcomers to the grid this weekend as she put the Power Maxed Racing Astra into 20th place, a tenth of a second clear of Paul Rivett’s Audi as the multiple Clio Cup championship finally makes his debut.

The returning Glynn Geddie was 24th in the Team HARD Volkswagen, with Hammerton 26th in the second Audi having been called up to replace the absent Bobby Thompson.

Hammerton would be the final driver to set a time in the session, with Jack Goff managing just a single out lap before being forced to return to the paddock in his VW due to a currently unknown technical issue.

Qualifying will take place at 14:15 with a 25 minute session involving all 27 drivers, with the top then going through to a special ‘showdown’ where the times will be reset, and there will be a further ten minutes of action to determine who qualifies on pole.