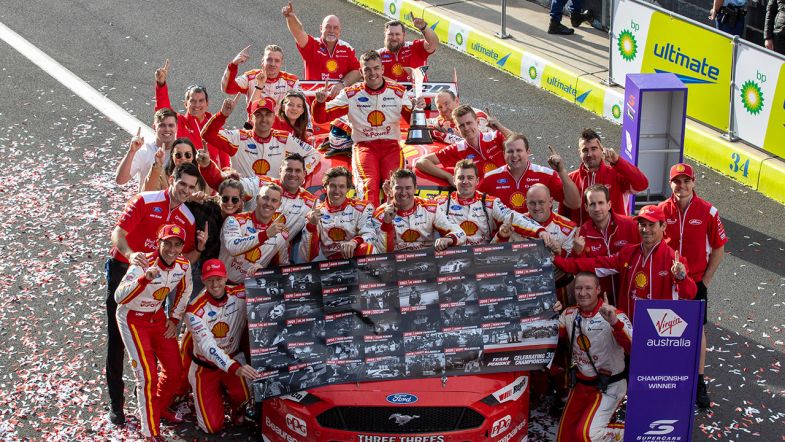 The worst kept secret of the past year has finally been officially confirmed with three-time defending Supercars champion Scott McLaughlin announcing his departure from the category, moving to the United States to start an Indycar career with Team Penske.

Team Penske have also split from Dick Johnson Racing, ending a six-year relationship which has netted three driver’s and team’s championship titles since 2015 thanks to McLaughlin and team-mate Fabian Coulthard.

While McLaughlin’s departure from the category seemed imminent from the time he won his first title in 2018 with Penske’s American platform giving him plenty of future options, Team Penske’s withdrawal from the sport comes amid losses for the Penske Corporation throughout the COVID-19 pandemic.

Ahead of his Indycar debut in this weekend’s Grand Prix of St. Petersburg in Florida, McLaughlin thanked those from DJR Team Penske for the four years he was with the team but looked ahead to the near future.

“I want to thank every single person on the team, and everyone that has helped me reach this point in my career.

“I wouldn’t be in position to continue to chase my dream without the hard work of so many people along the way.

“I’m looking forward to the challenge of joining one of the most iconic motorsports programs of all time – Team Penske’s IndyCar team.

DJR Team Owner Dick Johnson, himself a five-time championship winner, said McLaughlin was a generational talent and the rebranded team looks forward to having him back in October 2021 for the Bathurst 1000 while also reassuring fans about the future of the team.

“We want to thank Scott for his professionalism on and off the track,” said Johnson.

“He is a generational talent and we are excited he will join us as a co-driver at next year’s Repco Bathurst 1000 in October.

“We know Scott is in a great position with Team Penske for the future and we wish him all the luck in the world as he begins his IndyCar career.

“The future is also very bright at DJR. We have truly amazing people in our team – the same people that have been the driving force behind the race wins and championships we have won over the past six years.

“We also have a fantastic and committed group of partners, who remain in lockstep with us for 2021 and beyond, and some of the most passionate and loyal fans in motor sport.

“With that kind of support and experience, we are ready to build on our success with the Shell V-Power Racing Team.”

“We have enjoyed an incredible six seasons competing in the Supercars series with DJR Team Penske,” said Penske.

“Partnering with Dick Johnson and Ryan Story to form DJR Team Penske was an incredible experience that produced success on the track and in the boardroom.

“We have built so many lasting partnerships and friendships, and competing in Supercars has certainly helped strengthen our brand and our business in Australia and New Zealand.

“Unfortunately, with the challenges we have faced in 2020 as a result of the COVID-19 pandemic, we have had to readjust our business initiatives for 2021 and beyond.

“We want to thank Dick Johnson, Ryan Story, Fabian Coulthard and all of our team members for their hard work and dedication as we reestablished a championship organisation together over the last six years.

“I know that Dick, Ryan and the team will continue to build on that success moving forward.”

The 2021 driver line-up for Dick Johnson Racing will be revealed in the coming weeks with a question mark still hanging over Fabian Coulthard’s head despite a five-year relationship with the team.