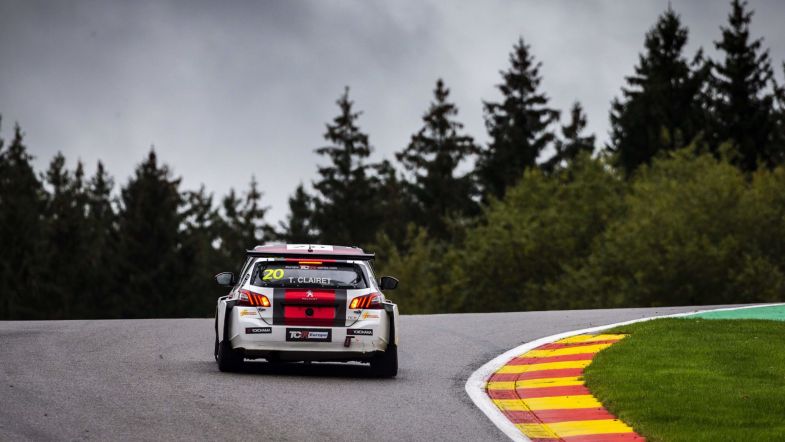 Team Clairet Sport’s Teddy Clairet admits that he ‘could have done a lot better’ over the course of the penultimate round of the TCR Europe Series season at Spa-Francorchamps despite a morale-boosting fourth place in Race 2.

The Peugeot 308TCR driver made the most of a tyre gamble in the second race to vault up from 14th on the grid to finish just off the podium.

It was the same tactic as used in both races by double winner Mikel Azcona, who used dry tyres on the front and wet tyres on the rear of his car.

Clairet admitted that while the team made the wrong call in qualifying, the races were a learning curve which proved successful at the end of the weekend.

“The conditions this weekend were very difficult,” Clairet told TouringCarTimes.

“The choice of tyres was very important and unfortunately in the qualifying session, we didn’t make the right one.

“I started 15th in both races [14th in Race 2 due to Nicolas Baert’s penalty] but today we didn’t make the same mistake [as in race 1], this one was a lot better.”

With the correct combination of dry and wet tyres fitted to his car for the second encounter, Clairet said he enjoyed getting involved in positional battles although lamented a weekend of missed opportunities.

“There were some good battles out there and I was pleased that I was able to fight with the other drivers and that it worked well,” Clairet added.

“I was in a good rhythm and I think a podium was definitely possible.

“It feels good to finish the weekend in this way, we weren’t lacking much, but I am happy with the end result. We could have done a lot better this weekend but in the end, we haven’t come out of it too badly.”

Clairet is already looking ahead to scheduled final event in Jarama, where he says the circuit and the races will be a new experience.

“The finale in Jarama will be something of a discovery,” Clairet said.

“It’ll be up to us to adapt, we won’t have any weight there so we will do our best to finish the season with some more positive results.”