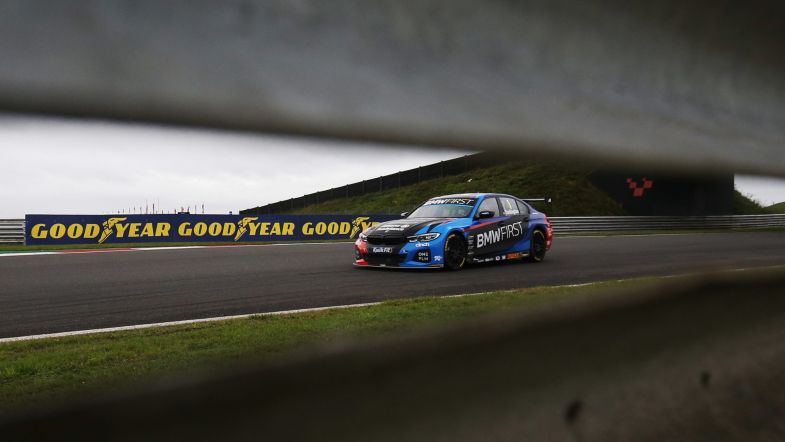 Colin Turkington has moved back into the points lead in the race for the 2020 BTCC title after a lights-to-flag win in the opening race at Snetterton.

In slippery damp conditions following rain overnight, the whole field ultimately elected to go with slick tyres despite the two preceding support races being run on wet rubber, with Turkington making the best start when the lights went out to lead the field into Riches for the first time.

Tom Ingram would clear Jake Hill’s Honda to move up into second spot and briefly got alongside Turkington through the opening lap, with the main action coming further down the top ten as Aiden Moffat tried to go between Tom Oliphant and Ollie Jackson into turn one; the resultant skirmish seeing both Oliphant and Jackson spin onto the grass and to the rear of the field.

As the tyres came up to temperature, Turkington set about building a lead out front and quickly managed to ease away from Ingram and Hill behind as they diced over second spot. Hill would finally make a move to try and take second at the Montreal Hairpin on lap seven only to make contact with the rear of Ingram’s Toyota – putting the Speedworks driver sideways as he swept through.

Hill however wisely allowed Ingram back through to reclaim the place to avoid a penalty, although by this stage, Turkington was long gone up the road in his quest for victory.

The WSR driver duly wrapped up win number four of the season, with a maximum score from the race being enough to move him into the championship lead – albeit only on countback thanks to a superior finishing record to Ash Sutton.

Sutton had run seventh at the end of the opening lap before battling ahead of Adam Morgan’s Mercedes on lap two, and then took fifth from Dan Cammish going down the Bentley Straight late on to secure fifth place.

That means he sits level with Turkington in terms of the points, but Turkington takes the championship lead by virtue of having more second place finishes.

Behind Turkington, Ingram took second place from Hill to close to within 23 points of the championship lead, with Hill maintaining his impressive run with another podium in the older FK2 Honda.

Rory Butcher took fourth place after a mid-race move on Cammish into Montreal, with Sutton following behind and Cammish having to settle for sixth having held off Adam Morgan in the closing stages. Cammish now slips to third in the standings and is eight points off Turkington and Sutton ahead.

Josh Cook battled his way through to eighth spot having failed to make Saturday’s Top Ten Showdown in qualifying, with Senna Proctor and Michael Crees rounding out the top ten – the latter closing in on the Jack Sears Trophy lead in the process.

After the opening lap clash, Oliphant would manage to come back through to 14th place at the finish, with Jackson failing to score in 21st. Moffat would also no score after being forced into a mid-race pit stop.

Paul Rivett was best of the four newcomers in 19th spot in his Trade Price Cars Racing Audi.