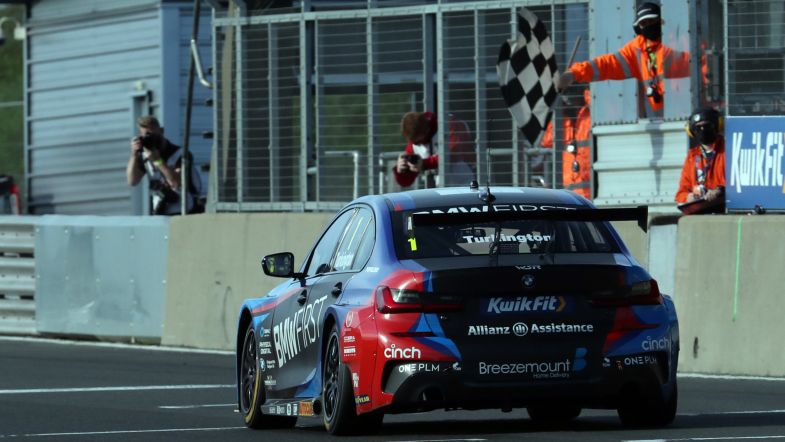 Colin Turkington survived a late safety car scare to make it two wins out of two at Snetterton and extend his lead in the BTCC standings.

The West Surrey Racing driver had started from pole and was able to maintain the lead when the lights went out, breaking away from the pack behind as he had done in the opening race.

Turkington looked set to be cruising to victory before Jack Goff lost the rear of his Volkswagen on what was set to be the penultimate lap and slammed into the barriers on the exit of turn one, bringing out the safety car.

With laps added on whilst the VW was removed, the race boiled down to a one lap sprint to the finish but Turkington nailed the restart to take a second win of the day – with the additional points for leading a lap and setting the fastest lap keeping him on a perfect score for the weekend.

Second once again would be the Toyota of Tom Ingram, but only after he was able to survive contact from Rory Butcher’s Ford on the final lap of the race. The pair had run together throughout and it was at the hairpin where Butcher tried to make his move only to run into the rear of the Toyota ahead.

Ingram was able to continue despite the damage to the rear of his car, but Butcher was delayed enough to allow Ash Sutton to nip through into third in the Infiniti to steal a podium – meaning he dropped seven points to Turkington in the standings.

Dan Cammish had looked good for fifth place in the leading Team Dynamics Honda but a move on Butcher on the final lap would instead see him drop into the clutches of Jake Hill – who won a drag race to the line to steal the place and leave Cammish in sixth, dropping him to 20 points off the lead with four races to run.

In what was a largely quiet race before the late safety car, Josh Cook took seventh spot ahead of Adam Morgan, with Ollie Jackson one of the few drivers to make noticeable progress as he climbed up to ninth place.

Chris Smiley rounded out the top ten and will start race three on pole thanks to the reverse grid draw.