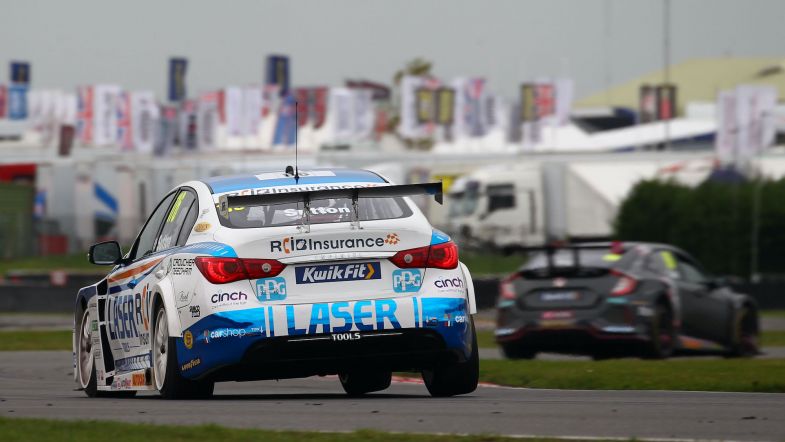 Ash Sutton has vowed to come out “all guns blazing” in the BTCC season in his bid to secure a second championship crown after slipping behind Colin Turkington in the title race at Snetterton.

The Laser Tools Racing man took a slender lead into the penultimate weekend of the campaign over Dan Cammish and Turkington and would enjoy a solid day on track in Norfolk at the wheel of his Infiniti Q50.

Although unable to match the pace of Turkington’s BMW, Sutton took finishes of fifth, third and fourth from the three races to ensure that he will go to Brands Hatch for the season finale sitting nine points down on the defending champion in the title race.

Sutton however was able to provisionally wrap up the Independents’ title for the first time having moved 60 points clear of Rory Butcher in the standings, with a superior head-to-head record in the unlikely event of a tie.

“That was a damage limitation weekend!” he said. “We didn’t have the outright pace to be at the front but we dug deep and managed to come away with a third, a fourth and a fifth. More importantly, we’re in the mix for the title so it’s game on.

“In race one I suffered some damage so that hampered me and then in race two I just picked my moment and managed to come away with a podium. I think it’s fair to say I was up against it in race three…

“I’m over the moon to have provisionally wrapped up the BTCC Independent Drivers’ Championship though; that was one title that had eluded me up to now so it’s nice to get that box ticked and not have to worry about it heading into the final round.

“We’ve got a nine point deficit to make up on Colin at Brands Hatch and you can believe that I will be coming for him all guns blazing. The whole season has led us to this point and I’m going to throw everything I have into the finale to become champion for a second time.”