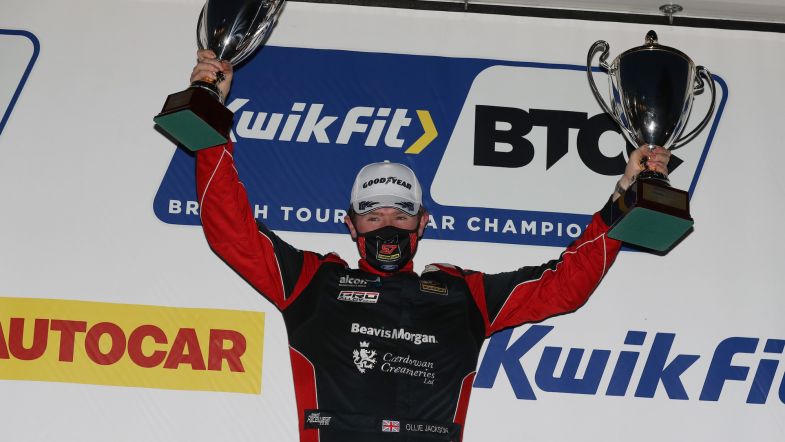 Ollie Jackson admitted he was delighted to show that his victory at Silverstone was “no fluke” after taking a second win in three BTCC meetings at Snetterton.

The Motorbase driver had looked set to endure a race day to forget in Norfolk when, having qualified inside the top ten, he was forced off at turn one and left to finish down in 21st place.

Jackson rebounded well in race two however to come through to eighth place, which meant he then earned a second row start for the final race of the weekend.

A storming opening lap saw him get into the lead of the race thanks to stunning move on Adam Morgan’s Mercedes, and he would then remain out front for the entire twelve lap encounter – despite Morgan putting on ever increasing pressure in the final laps.

“It’s a fantastic result and one I didn’t expect after race one – I thought that was the start of a day wasted,” he said. “But a good race two brought me back through the field and the car felt fantastic to get me back where we should have been.

“The start was crucial and I managed to get ahead, and I think Adam’s car was set-up to perform more towards the end whereas mine was switched on from the start and I could pull a gap.

“He got close in the final stages but Adam is a fair racer and I had no concerns that he would do anything crazy and I trusted him. But I only had to make a small mistake and he would have been through, so I needed to keep my lines right and not give him a chance.

“It’s nice to show that the win at Silverstone wasn’t a fluke – although hopefully it didn’t look like one. To add to the win is great, and hopefully it silences any doubters I might have had.”