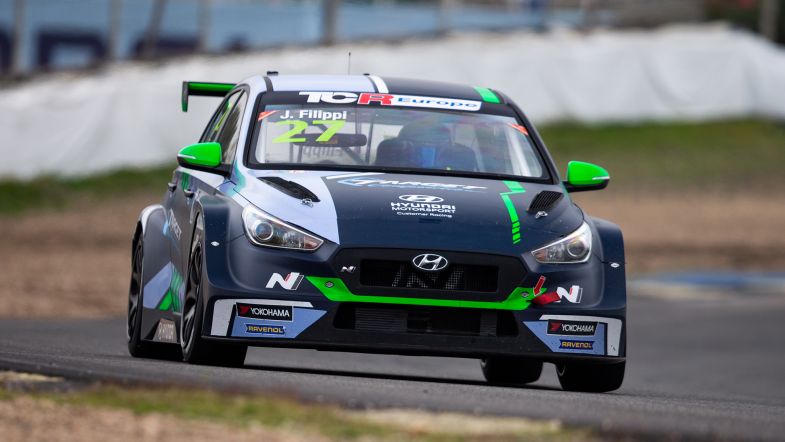 Target Competition’s John Filippi made the most of challenging conditions at Jarama to take his first TCR Europe victory ahead of Comtoyou Racing’s Mehdi Bennani, who claimed the 2020 drivers’ title with second place.

A heavy downpour before the race didn’t stop most drivers from choosing again a mixed tyre setup for the race. At the start Filippi took the lead from pole position in his Hyundai, ahead of BRC Racing’s Dániel Nagy and Bennani in his Audi RS 3 LMS.

Race 1 winner Mikel Azcona, in his Cupra TCR, climbed from tenth on the grid to seventh place during the first lap and soon overtook JSB Competition’s Julien Briché for fifth place, with Target Competition’s Andreas Bäckman his next target.

The safety car was called into action on lap six when Team Halder’s Mike Halder crashed against the barriers in his Honda, ending his race and his championship chances at the same time.

The race was restarted on lap eight, with Filippi retaining the lead ahead of Nagy and Bennani. Peugeot driver Briché and Azcona continued their scrap overtaking each other before the Frenchman managed to stay ahead – going on to overtake Andreas Bäckman at Turn 1 on lap ten. Azcona also lost a position to Comtoyou Racing’s Nicolas Baert in his Audi.

Briché continued moving forward, overtaking Bennani and Nagy to take second place on lap 12, just before both went wide and were overtaken by Bennani again. Nagy also fell behind Azcona and Baert, with the Frenchmann again overtaken by the Spaniard.

Azcona made a move on Andreas Bäckman on lap 15 to take fourth place, with the Target Competition driver now under the grips of Baert. Nagy crashed out against the barriers on lap 15.

At the chequered flag, Filippi took his first ever TCR Europe victory, followed by Bennani, who claimed the TCR Europe crown. Briché completed the podium, despite Azcona closing the gap in the final laps.

Bennani claims his first TCR Europe crown with 285 points, followed by Filippi with 257 and Baert with 244.