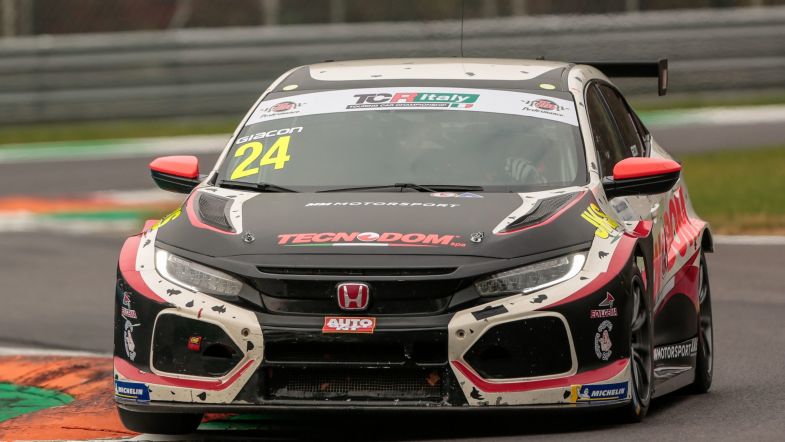 Jonathan Giacon won a frenetic first TCR Italy championship race of the weekend at Monza, a race that was interrupted twice by the safety car.

Championship leader Eric Brigliadori started from pole position but was out dragged to Turn 1 by Honda driver Jacopo Guidetti.

The safety car was called into action at the end of the first lap as CRM Motorsport driver Ettore Carminati was left stranded Variante della Roggia with major damage to his Hyundai i30 N.

The first lap also had title candidate Marco Pellegrini in the wall at Variante Ascari following contact with Damiano Reduzzi. Hyundai driver Pellegrini was able to continue but dropped down to finish seventh.

And the race ended just two corners later for Guidetti as he was pushed into a spin by Salvatore Tavano, hitting the wall in spectacular fashion heading to Variante della Roggia.

The safety car was called into action again to remove the wrecked Honda Civic Type-R TCR.

The race resumed on lap six and PMA Motorsport Felice Jelmini immediately made a move on Igor Stefanovski to claim third.

Brigliadori made a mistake at the exit of Variante della Roggia while in second place and lost two places.

Hyundai driver Stefanovski was next up to make a mistake, allowing Brigliadori back up into third place.

Brigliadori then used the superior straight line speed of his Audi RS 3 LMS to pass Jelmini for second place at the start of lap nine.

But things turned sour a lap later for Brigliadori who was hit from behind by a late braking Stefanovski at Turn 1.

Brigliadori dropped down to finish sixth while Stefanovski was given a 25-second penalty by the stewards, dropping him to 14th position.

Giacon won the race by just four tenths of a second ahead of Jelmini while Cupra León Competición driver Tavano claimed the last podium spot.

The second race of the Monza weekend starts at 10:50 CET tomorrow.