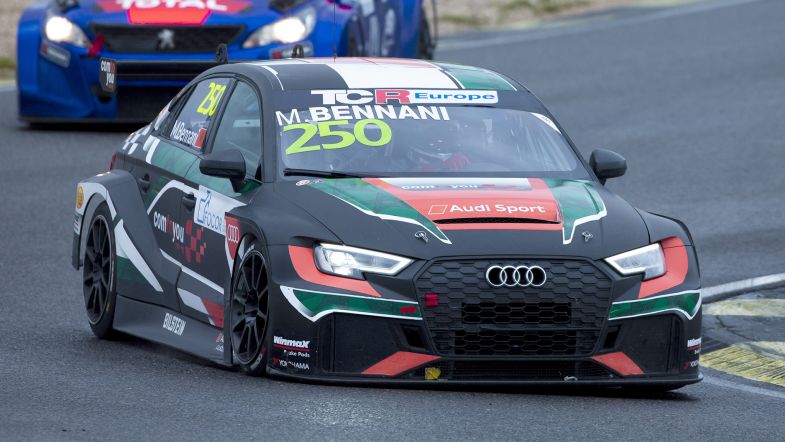 Bennani started from sixth on the grid and, after several scraps on the track, finished in second place. His result, together with Mike Halder crashing out of the race, allowed the Moroccan to claim the title.

“The race went very well,” Bennani told TouringCarTimes. “It was very, very nice year and I’m really happy that we could win the title and also the teams’ championship. I want to thank Comtoyou and also Audi Sport for their support.”

The Audi RS 3 LMS has been fast all season, with Bennani heading into the season finale with 60kg of compensation weight. The Comtoyou Racing driver didn’t expect to come out on top given the conditions.

“I was happy to finish in the top-three in the championship because I was carrying a lot of weight with 60 kilos o ballast, so to be champion is even more!” added Bennani. “Everything went right this weekend, we had nice races. We also had a good show which I think is good for people watching as we started with the slicks in wet conditions.”

Bennani had fellow Moroccan driver Sami Taoufik as team-mate, who drove his first full season in touring cars. The 2020 TCR Europe champion is also encouraged by the results achieved by Taoufik.

“This year has also been really nice because we had two drivers from Morocco,” added Bennani. “We are from the same country and almost from the same city and we are racing together and both of us are in the top ten so I’m very happy because he is a really good driver, very fast driver, very talented and I think we´ll see him growing really fast and getting titles.

“But I’m also very happy for the whole team and the staff. I think I will realise it more when I think about it tonight!”

Bennani claimed the title without winning any races, but with three podium results, scoring points in all the races.

“Yes, this is strange!” added the Moroccan. “Normally, to be the champion you have to win races, but I think that, for me, also the points from pole positions, as I was the driver with the most pole positions this year, and, in the end, scoring points as I was all the time in the top five.

“Surely, I would be happier if some of my pole positions had become victories, but I’m happy this way,” added the Comtoyou driver.

Regarding next season, Bennani has some ideas about what he’d like to do: “We have to see, but now I’m starting to think about something else, it’s not all driving, we have Sami very fast in the car already, so let’s see what we can do.

“He’s European champion in go karts, he was a top ten regular in the Formula Renault, so he knows what he’s got to do and being around him, just to give him some experience, it’s something I would be proud to do.”