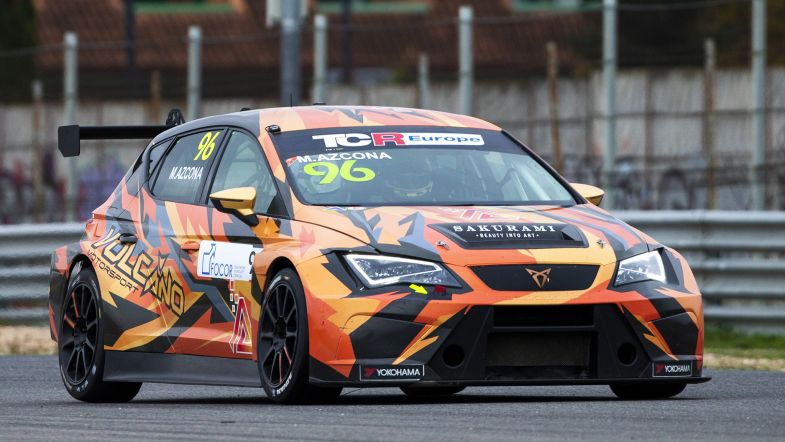 Mixed conditions welcomed the TCR Europe field for the race, with heavy rain falling during the night over Jarama. Cold temperatures didn’t allow for the track to dry up, with most of the field opting for a mixed tyre setup with slicks at the front and wets at the back.

Brutal Fish’s Martin Ryba went wide on lap one, damaging his car and was forced to retire.

But the key moment came when the safety car was called into action after Target Competition’s Jessica Bäckman (Hyundai i30 N TCR) went off the track on lap two, collecting Pepe Oriola’s Honda Civic Type R FK7 TCR as she returned to the track, with both cars sustaining heavy damage and were left stranded in the gravel.

The race was restarted on lap seven, with the positions remaining stable.

Championship leader Mike Halder lost control of his Honda Civic Type-R TCR under braking for Turn 1, hitting PSS Racing Team’s Franco Girolami, with both drivers retiring from the race. The incident called the safety car into action for a second time as Girolami’s car was stranded in the middle of the track.

The race was resumed after two laps, with BRC Racing’s Dániel Nagy overtaking Nicolas Baert for seventh place. Azcona opened a gap at the front, with the leading group stretching out the distances between them.

Further behind, Comtoyou Racing’s Sami Taoufik overtook Target Competition driver John Filippi for tenth place with two laps to go. The Moroccan continued moving forward and attacked Brutal Fish’s Daniel Lloyd during the final lap, but was unable to make a move on the Briton.

Azcona took his third straight win of the year as the chequered flag fell ahead of Teddy Clairet, with Homola completing the podium.

With just one race to the end of the season, Bennani has taken over the championship lead on 250 points, followed by Halder with 242 and Baert with 220.